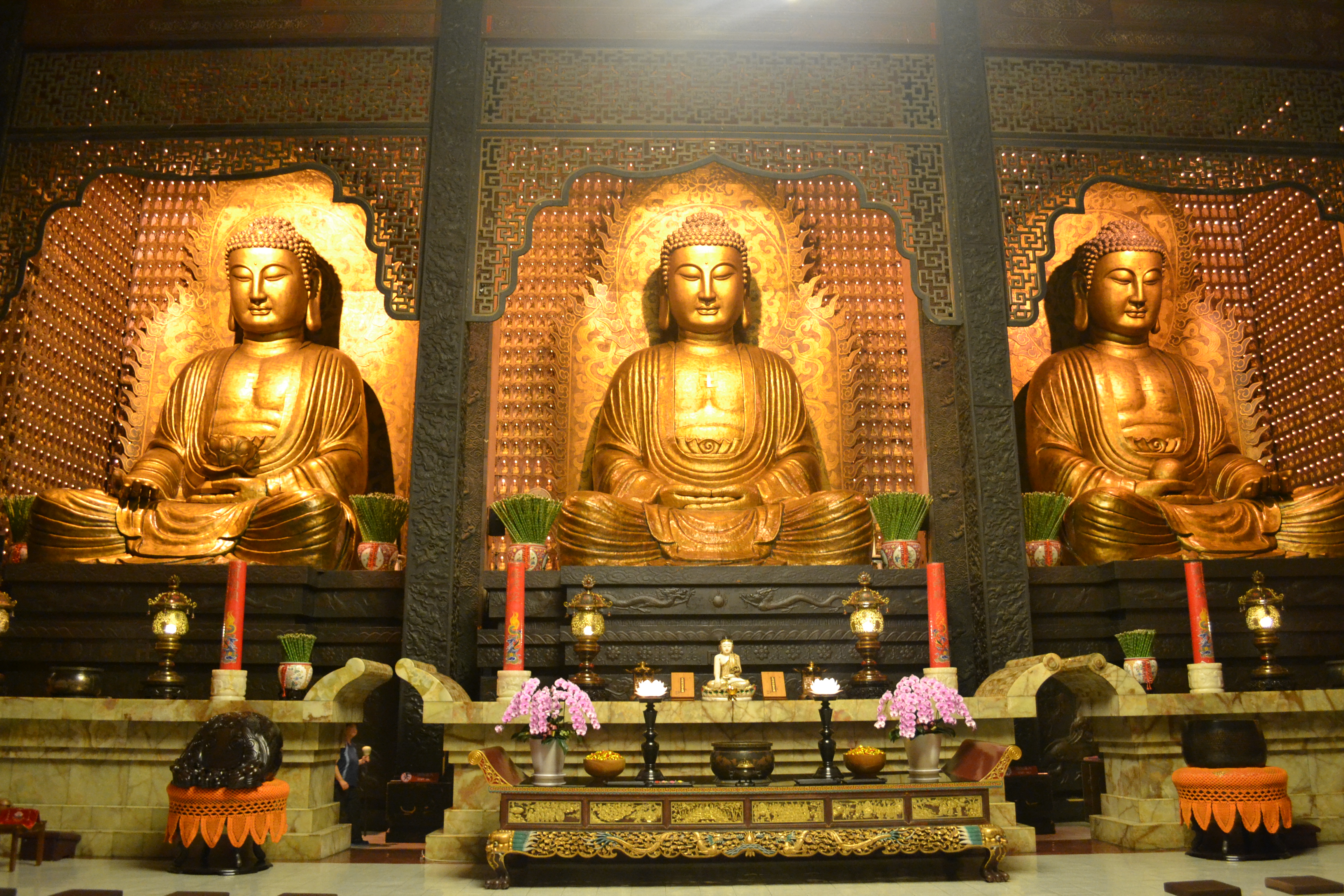 My Experience with Mahayana Buddhism

Since the moment I decided to go to a Mahayana Buddhist temple in the Philippines to study this lifestyle -Buddhism as such is not considered a religion- I saw myself trapped in a chaos followed by incessant questions and weird faces. Not only that but nowadays a lot of people still don’t understand why I went to live in a temple and what I did there. Well, I’m going to try to answer to every question I was asked (there may be some staying on the way).

The kind of Buddhism I’m going to focus on more is Mahayana for being the branch I studied but I’ll try to compare it with the learnings I discovered from the rest. There are a lot of interpretaions and ideas on Buddhism and different cultural adaptations but let’s start from the beginning.

The question I was asked more times by far was,

But, will you have to dress in orange?

No, not every Buddhist wears orange. First of all, let’s distinguise monks from devotees. Devotees are not forced to wear any kind of outfit vbut in ceremonies is optional to wear the Hai Qing, a black tunic, as a symbol of respect. In the case of monks colors change depending on the order they belong to. In mine they were wearing a brown one.

I also had that concept before getting there but I realized it wasn’t true. Orange is more used Theravada Buddhism, the one that spread in Thailand, Laos, Cambodia, Myanmar and Sri Lanka. 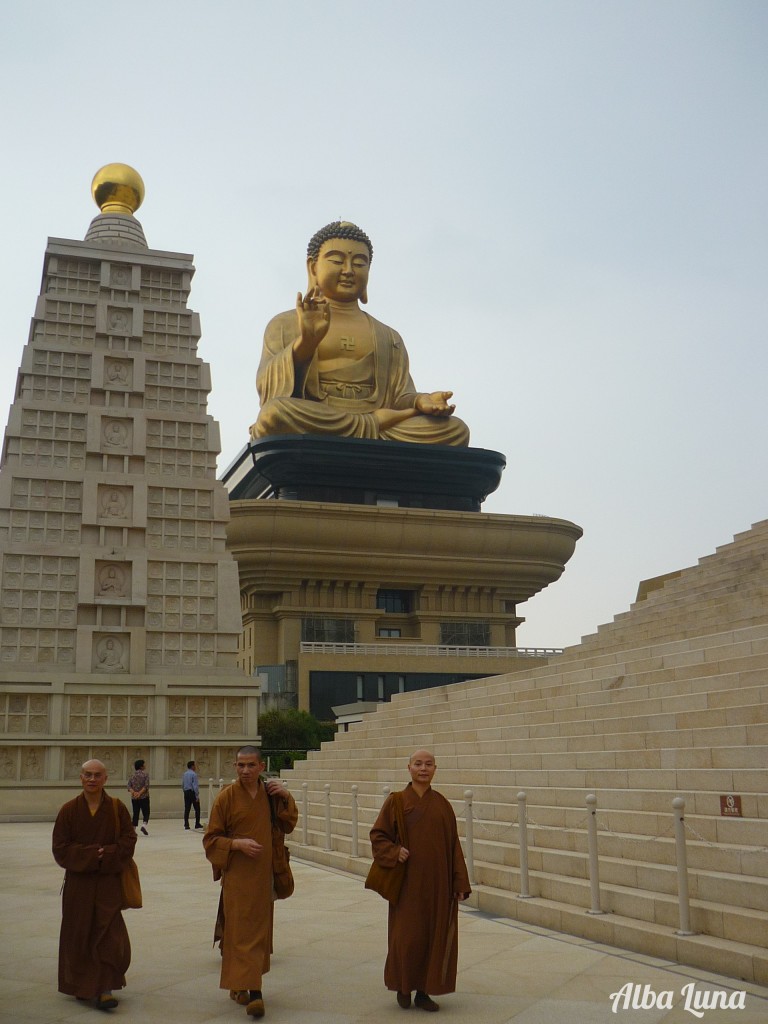 Please don’t mix them up with Hare Krishna, a sect that has its origin in Hinduism, spread in the West and people tend to confuse with Buddhism. Buddhism and Hinduism are paralel religions and some gods are shared but today is clearly differentiated. In fact  Hare Krishna has nothing to do with either both.

According to Mahayana (big vehicle) in China and Taiwan, orange color indicates prestige and celebration but only can be used by the main monk in special ceremonies. Devotees can wear Hai Qin, as a symbol of respect.

Will you have to sing Hare Krishna, like those that go in group in the streets?

Oh please! again with the Hare Krishna… is that the only reference we really have?

Let’s go back to Buddhism. There are diverse rituals and ceremonies like the morning chanting to pay homage to a bodhisattva (someone that got enlighted), accepting the precepts and meditation.

Meditation, how does that work?

How am I going to leave my mind blank? I’m not able to do that.

There a lof of different kinds of meditations, ones are visualizing an object, others analyzing the energy in your body but all of them focus on bringing the awareness to the present. They all coincide on letting the mind free of useless thoughts.

In Mahayana chan meditation is practiced (known in Japanese as zen), sitting on a lotus or semi lotus position and is combined with walking meditation. 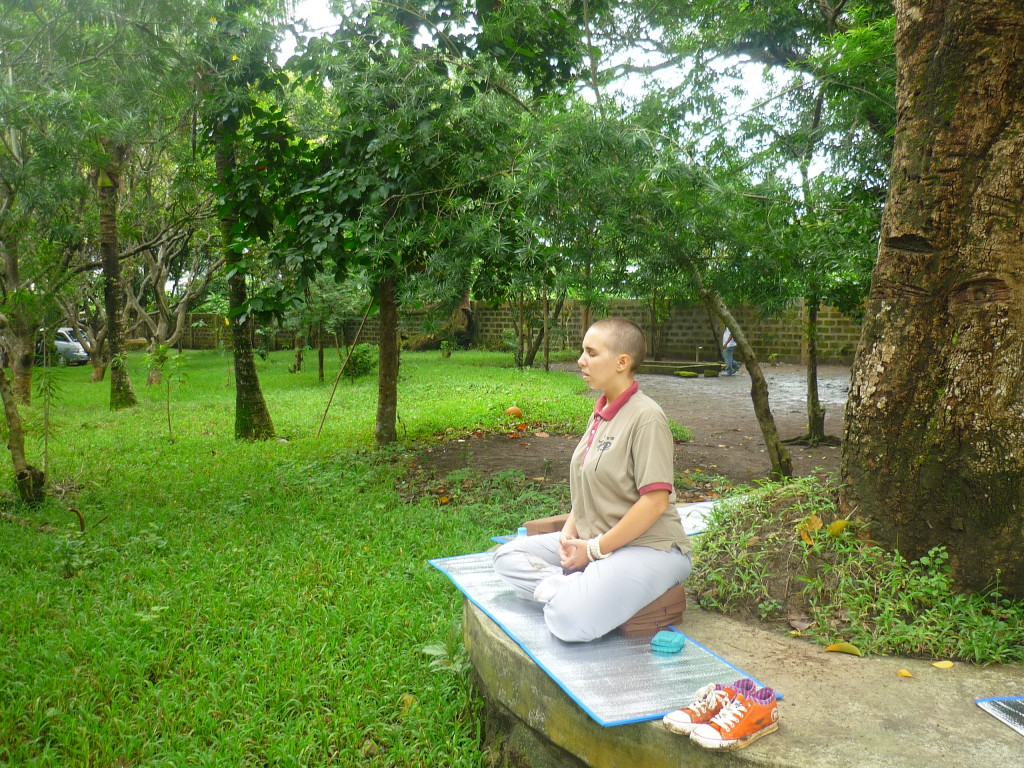 Another kind of meditation I tried was Vipassana that even if it’s not related to religion, it allows you to get deeper in your thoughts and being aware of your breathing.

And, will you shave your head? they will brain-wash you…

Not all monks and devotees shave theirs heads. Some orders force monks to do so as a precept but devotees are not at all. In the order in which I was monks shaved their heads firmly every 15 days, with a razor blade.

I shaved my head because I liked the philosophy behind getting rid of hair, the ego and materialism. 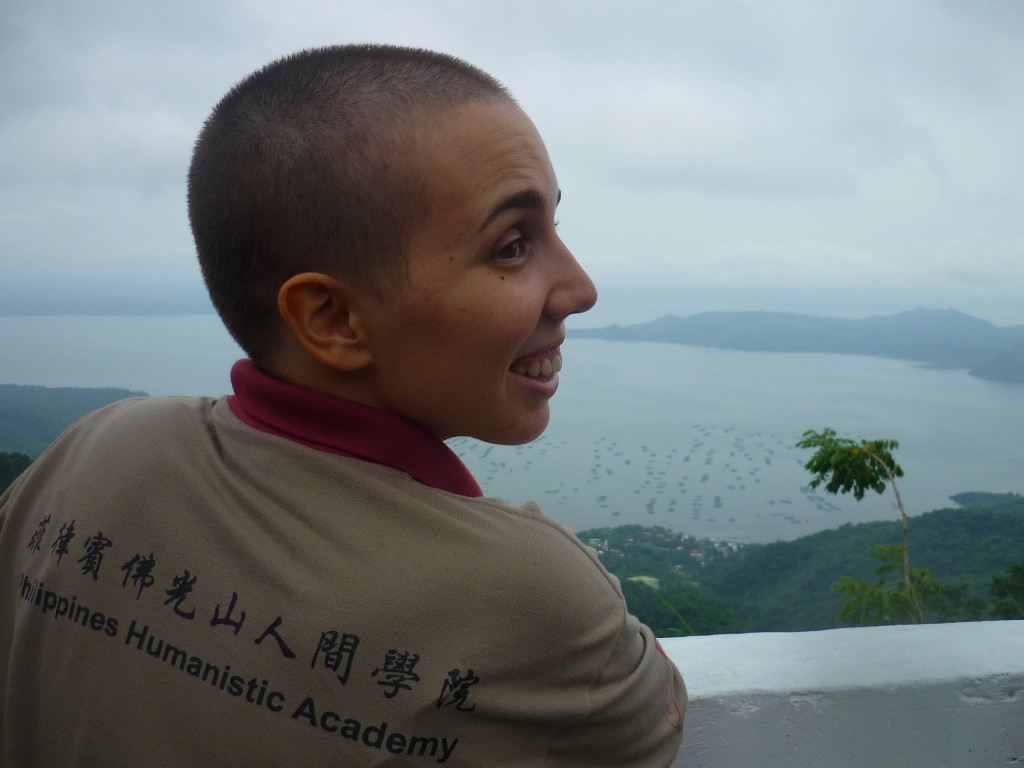 And… you won’t be able to eat jamón and chorizo?

In Buddhism there’s not an absolute rule about this. Even though in the temple we followed a strict vegan diet, being a Buddhism doesn’t mean you have to be vegetarian. In general terms the awareness for other sentient beings is there but it’s not a generalized rule.

In fact in Thailand this ‘rule’ is not followed at all even if  99% of the population is Buddhist. It depends on the culture and habits. In Tibet even monks eat meat, who’s going to survive in that cold weather otherwise?

Since I came back from Asia I tried to keep vegetarian and even if I stopped eating meat (only in special occasions) chorizo and jamón is something hard to quit. Yes, that’s the way I am.This is funny for a lot of people for I need to fit in a box, either I’m a vegetarian or I’m not!

But, with these hot dogs who can’t be vegetarian? (they had to tell me several times that it wasn’t meat) 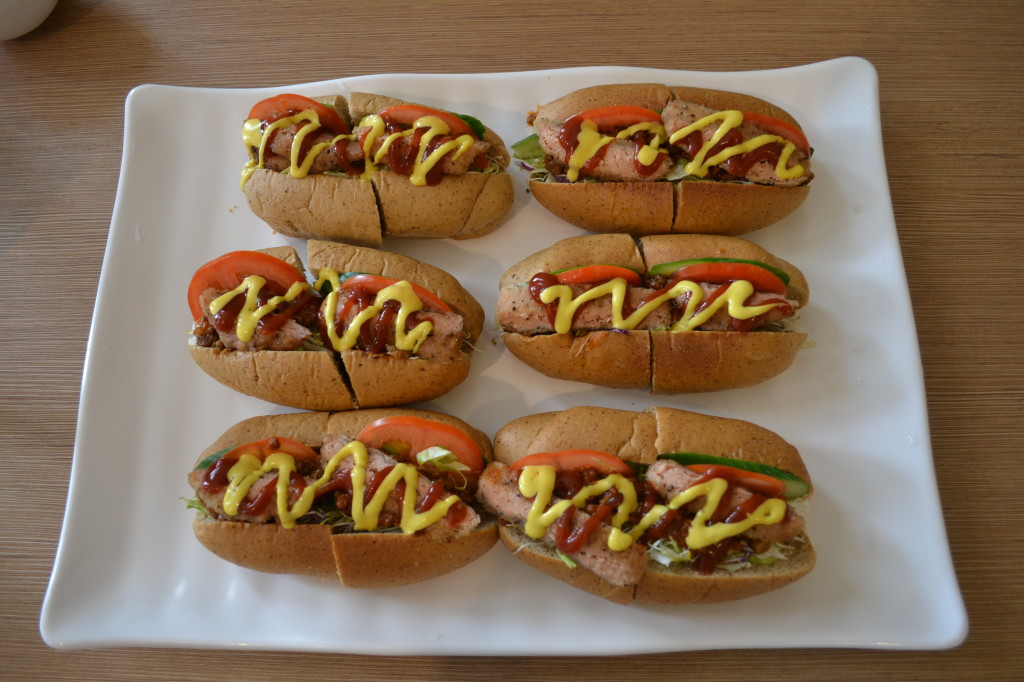 Being a Buddhist doesn’t mean to repress yourself

Moderation is a virtue to get enlighted but that doens’t mean you have to live an austere life. In Buddhism intentions behind every action are very important not so the end.

In Hinduism and Christianism the concept of reincarnation is believed, the encarnation of the soul in a new physical body (in Hinduism that soul is called atman). In Buddhism, they believe in rebirth, the conscience (a record of the mind) is the one taking life in a new body. This conscience is dormant until is awakan by certain circumstance. Most of Buddhists don’t believe in a permanent self but in a human conscience that’s disolved when dead and remains are the ones that stay. These remains carry with them the karmic marks that have accumulated in previous lives (but not memories or emotions)

They explained it to me this way: imagine you were a football player in a previous life and you discover in this life that you are good at it. That can be your conscience where your hability to play football remained recorded and you have awaken it little by little.

is very linked with this point. It’s interpreted as the law of cause and effect. Karma is not a reward or punishment to every single action you take but as a practice of the human actions that have consequences. Karma travels wherever the conscience until the next rebirth.

The Buddha with the fat tummy

that we see everywhere in Western countries is not yet a Buddha but a bodhisattva (an enlightened being) known as Maitreya. He’s the symbol of prosperity and weath and that’s why is so revered.

According to Buddhism history is divided in eras marked by the budas awakened . We are now living in the era of Sakyamuni Buddha, the enlightened name of Sidarta Gautama.

Well, next era will start when Buddha Maitreya comes to earth and that will be when humanity will be at its lower peak and has forgotten about dharma teachings. And I ask myself, can we go even lower?

is not revered by all Buddhists in fact it causes some reticence depending on which country. Let’s say he’s like the pope for Christians, only serve as reference for Catholics (and not even for all of them). Its main devotees are Tibetan Buddhist but there are some believers in other branches.

Do you have any more questions? Feel free to ask! 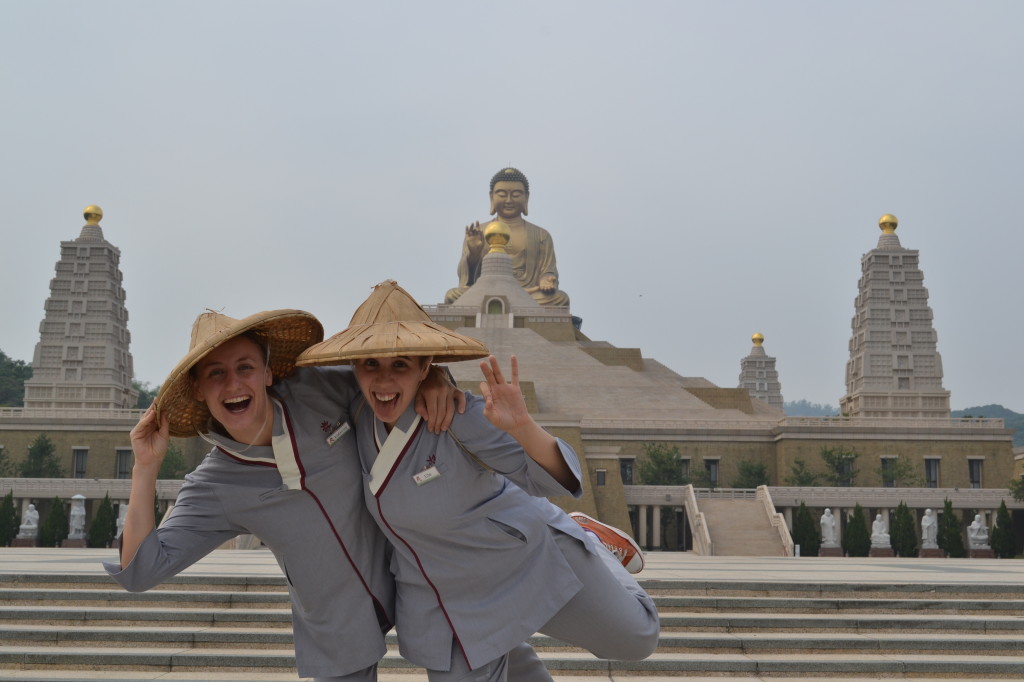 Related posts
San Andres for Backpackers
A Walk Around Fes
Around Medellin, the Land of Paisas

4 Replies to “Wrong Concepts About Buddhism”