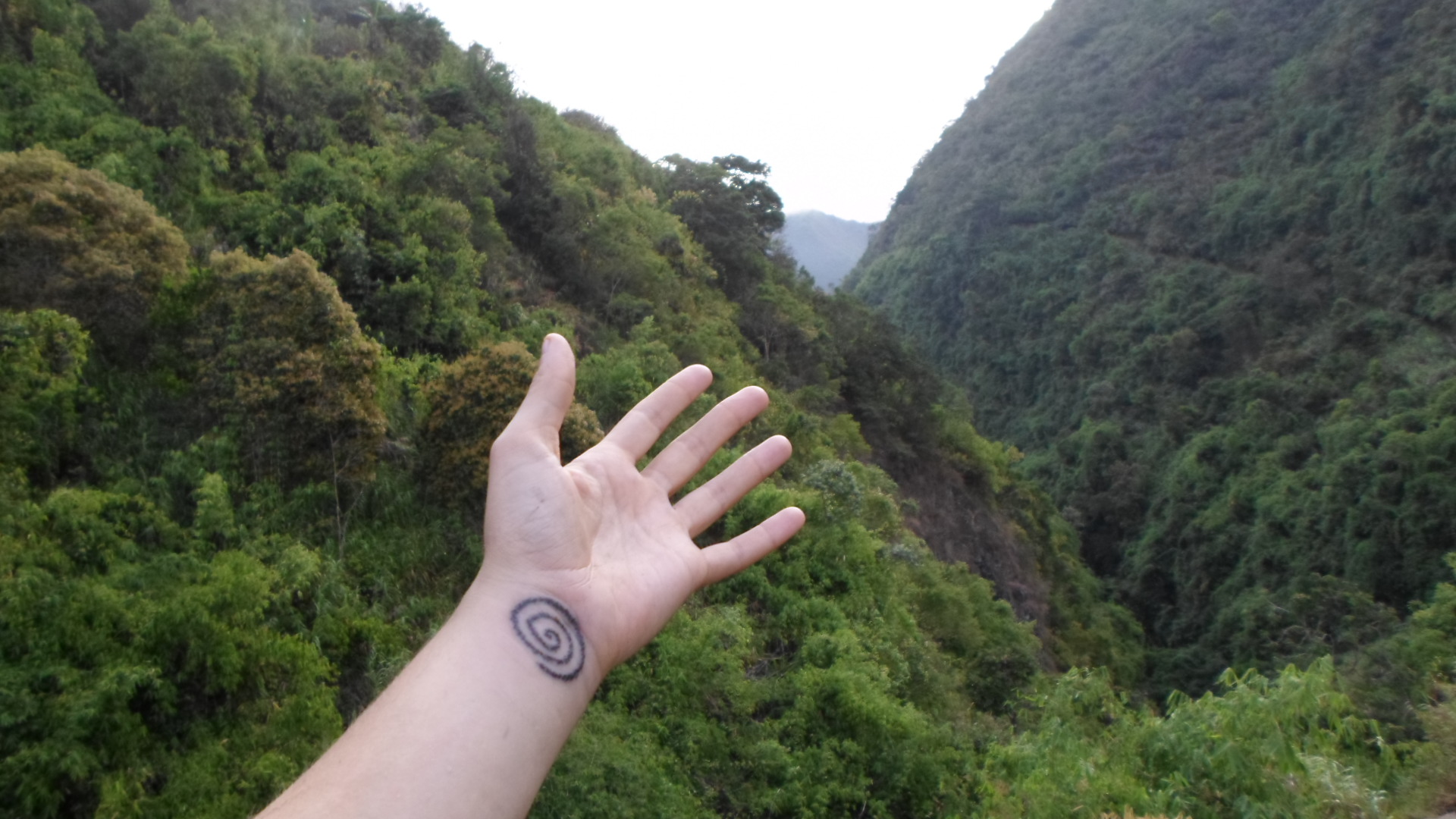 A Life’s Path to Get a Tattoo

Back in September of 2013 while taking some notes in one of the Buddhist classes in the Philippines I caught myself drawing spirals, one after the other. Spirals to separate ideas, to remark some points and to sum ideas up. It was then that I realised that I had been using that symbol very often along the last years. Maybe it was high time that I had it on my skin forever as a tattoo. 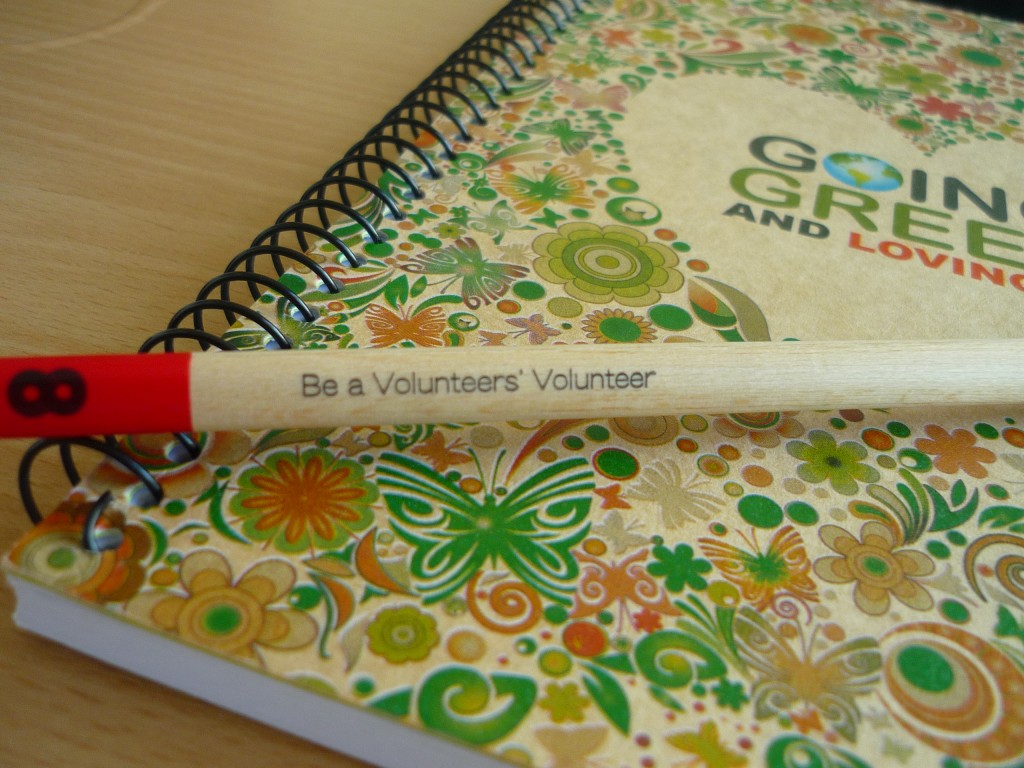 Drawing spirals would give me a sense of tranquility and confidence while boosting my creativity. 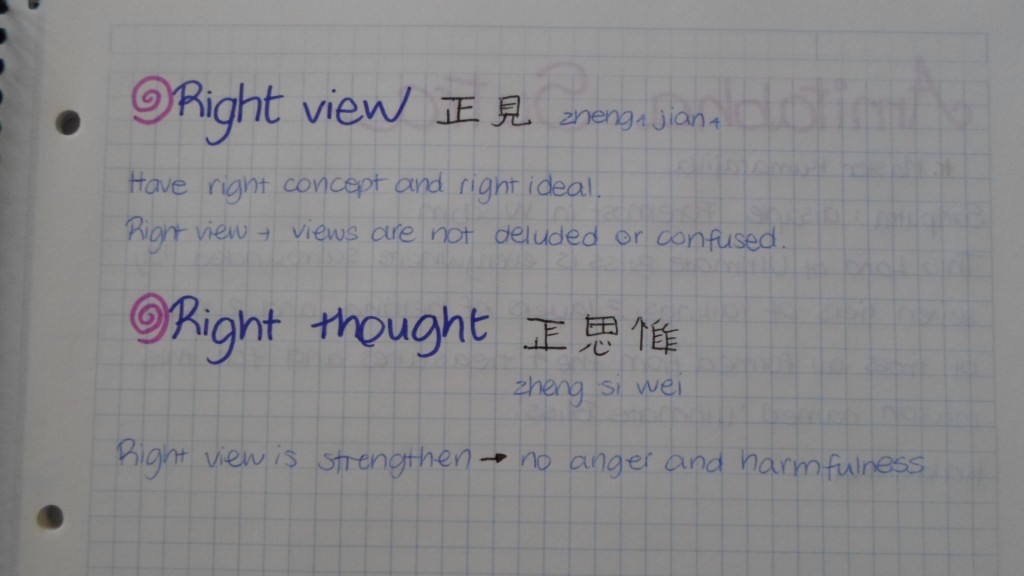 Some days after, while talking to one of my colleagues about where to go next in the Philippines I was told about a hidden place in the mountains where an old lady from a tribe had been making tattoos for all her life.

That’s when I connected dots and I said to myself that I had to go there at the end of my trip. It would be the perfect way to put an end to this experience, to close the cycle. As soon as the months passed by and countries, languages and customs changed, I became aware of the fact that I’d end up having it.

Why did I choose the spiral for my tattoo?

– It’s simple: if there’s anything that I’ve certainly learnt from my adventures on the Asian continent is that simplicity tends to always work. Simple things end up being the logic and prudent option. No extras, no complications, just how it is.

– It’s a popular symbol: it has several interpretations just how the world view is, simple in its own complexity.

Impermanence and Buddhism in my tattoo

1) Impermanence: according to Buddhism, impermanence is a universal law. If we transfer it into a non-religious level, isn’t it still a universal law? Isn’t it true that everything that’s around us is destined to change? 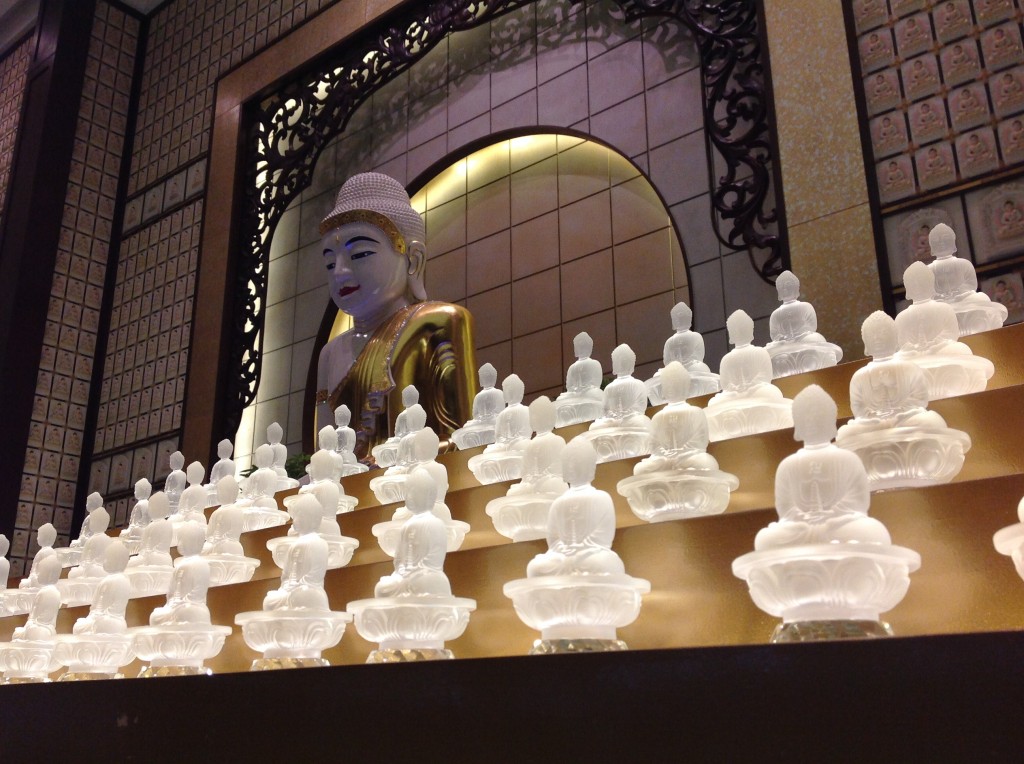 Nothing is constant, everything that exists in this world is subject to changes. Just like an spiral is. Nothing is permanent, everything changes following a continuous cycle. To deny change is to refuse to accept the natural life cycle, to go against nature. 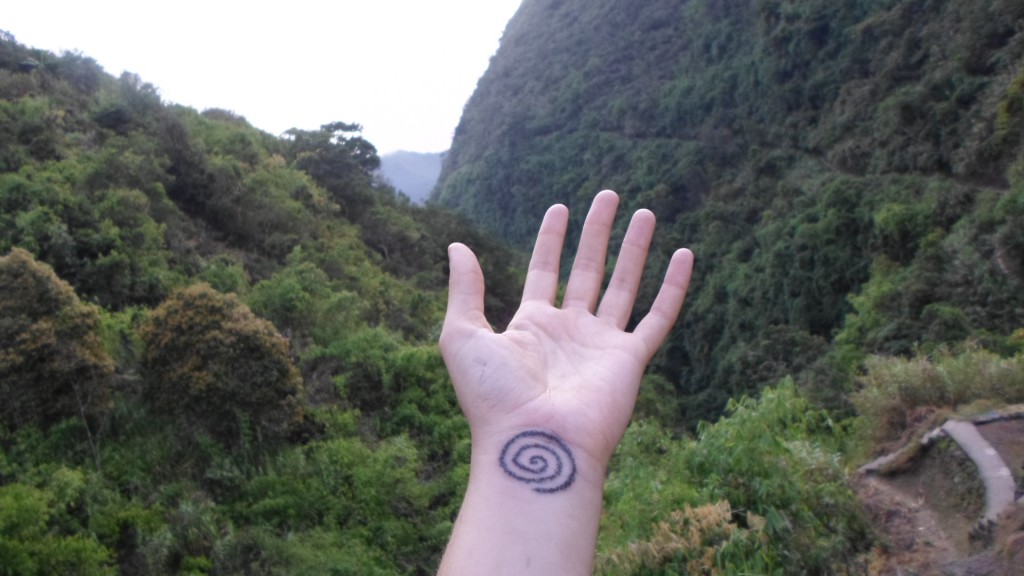 We insist on wanting to be somewhere else, in another moment that we forget the magic of the present. And the present is the only thing we have. There’ll always be a now in which we live while the tomorrow and the past are kept in an unachievable limbo of happiness.

Therefore, trying to be in another place or other circumstances is escaping from the reality that the now provides you.

It’s simple and at the same time logic but the hardest part is to put it into practice. It’s something I already knew but I never practiced. It’s still hard nowadays.

I got more knowledge on this issue by the hand of Buddhism. Buddha established a way to accept the constant change on what’s around us and that’s called the Middle Path (in Sanscrit: madhyamā-pratipad) that’s in a nutshell the path of moderation.

The Middle Path and the spiral tattoo

This doesn’t mean one needs to be immune or insensitive to what happens but that extremes are never convenient. Extremes take us to lose contact with reality and to create more desire and selfish actions.

Moderation, on the other hand, means to put into practice wisdom and mind cultivation without the need of restraining ourselves. It implies the search of balance.

2) What I like the most about my tattoo is the multiple interpretations that it has. People tell me what it reminds them of and that way I can see the different point of views around the same symbol.

Giovanni, a friend of mine told me, that’s the symbol of creativity! to what I answered ‘well, I did not know that! I would relate it more to a depressive state of mind that goes in circles but in the end if one fights for it and wants it badly, gets out of it.’

‘But isn’t creativity a way to get out of depression?– he replied wisely. How right he was!

Another friend, Kimi, a manga freak, told me that it was a naruto, a symbol used in manga under the same name.

3) My symbol is also of Celtic heritage and this one is very important for me, sentimentally speaking.

My dad is a Celtic culture lover and he told me since I was a kid about this wonderful world and its symbols.

In terms of spirituality, the spiral symbol can represent the path leading from outer consciousness to the inner soul or what it’s the same from materialism, ego and perception to enlightenment,  essence and nirvana. It also marks the evolution of humankind on an individual and collective scale.

In terms of rebirth or growth, the spiral symbol can represent the consciousness of nature that begins from the  center and expands outwardly.

If we observe our surroundings consciously we can get to know the deep meaning of the spiral in nature, the role it plays. Fossils, galaxies, tornadoes… The spiral is more present in our lives that we believe!

I invite you to contemplate nature and try to find your own spirals on what’s around you and the meaning they can have for you. I also invite you to do the following exercise. It will serve you as a reflective and self knowledge method.

Do you know what a mandala is? they are spiritual representations that have been used as rituals for centuries by Buddhists and Hinduists.

I got to know about them thanks to Francesca, a classmate of the Buddhist course and truth to be told its power fascinated me.

The idea is to draw or print in a piece of paper several circles in an spiral way and to write inside how you feel in this very moment. The first thing that comes to your mind, there are no wrong or correct ideas just let them flow. Write, one word after the other, without thinking what they may say without being afraid of being judged.

Ideally we’d write positive thoughts full of colors everywhere to create a creative and optimistic work. Let yourself be trapped in the grandeur of creation. Create, write. Link ideas, keep on writing until the spiral is over.

What’s the result? Do you like it? What does it inspire you? 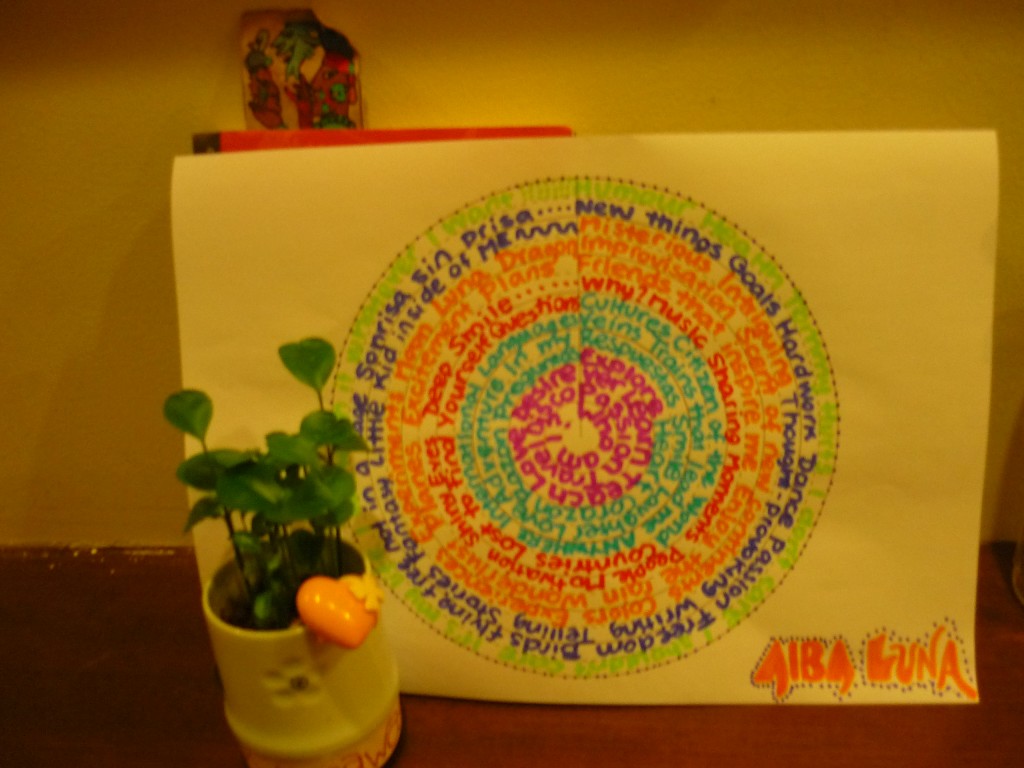 Put it in a place where you can always see it and remind yourself of who you are or who you want to become. That’s what I do and it’s working.

Never lose sight of who you are! All that creates a positive energy, just as an spiral does.

4) Everything has a starting point. A first step can take you to a new world full of possibilities. May the path be long and in circles there will always be a way out, a solution.

That’s why I chose the wrist to have the tattoo. It serves us an everyday reminder. A reminder of the fact that everything can change from one moment to the next and that shouldn’t make me feel anxious or resigned.

The wrist is an ideal place to remind me that there’s an universal law that will never change because the only thing that’s permanent is the impermanence itself.

Dance to the rhythm of life, move with it!

“The human mind always makes progress, but it is a progress made in spirals.”
Madame de Staël

Would you like to know more about the trip to get a tribal tattoo in the Philippines? Start here:

On My Way to a Traditional Tattoo

2 Replies to “What’s Behind My Tattoo”