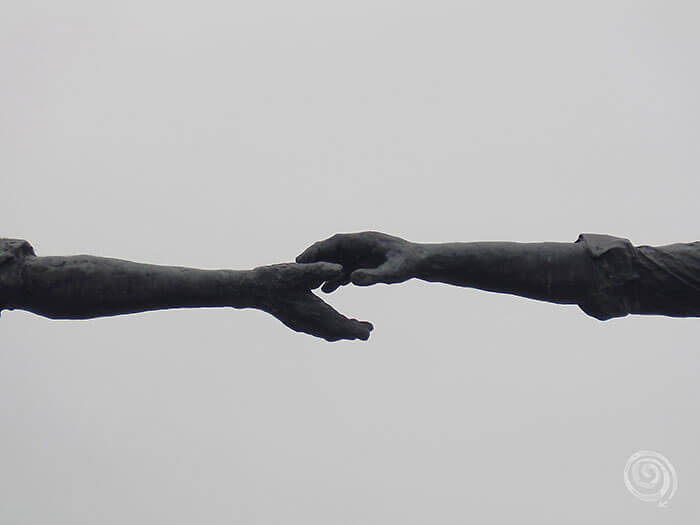 We wander around the streets of Derry, or Londonderry, a very important city in Northern Ireland and the site of a great deal of conflicts between Catholics and Protestants, Nationalists and Unionists. This part of history is full of societal tensions, religious wars and classist disputes.

Crossing the Border from Ireland to Northern Ireland

Crossing from Letterkeney to Derry, the Republic of Ireland to Northern Ireland, a border was waiting for me (or was I awaiting it?), a sudden change that would clearly divide the land. Two sides.

After road tripping for two weeks and a half around Ireland, I was curious about arriving in Northern Ireland. What would I encounter? Would its people be different? Would I still be able to feel the violence that wrought upon this part of the island for centuries? 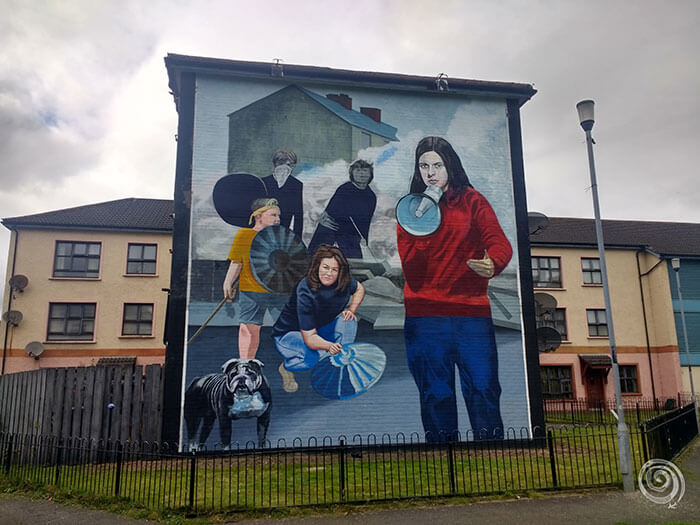 The Northern Ireland conflict known as The Troubles, lasted for more than 30 years (it still endures in some form to this day) and left its mark on generations since 1960. The truth is that before setting foot on this land I knew superficially about its history but once we arrived we soaked it all up. But, how can we describe the Northern Ireland conflict? Was it an ethnic conflict? Religious? Terrorist? A civil war? 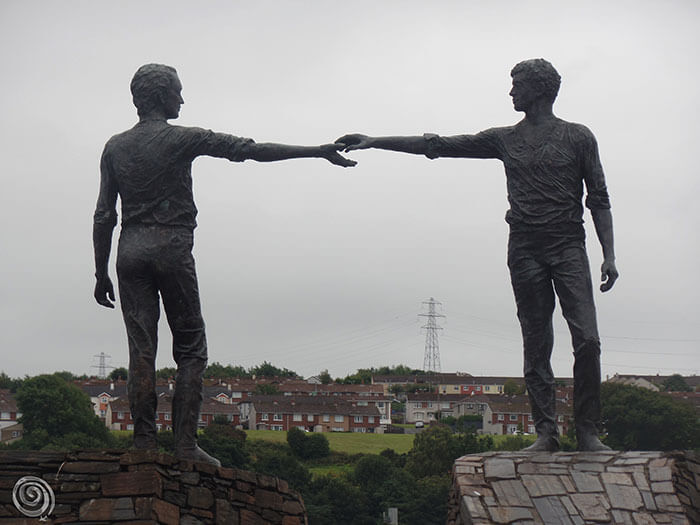 Protestants, Unionists in its vast majority, (who wanted and want to belong to the UK), formed 2/3 of the population of Northern Ireland in the 60s. They considered themselves not Irish but British and saw the Republic of Ireland as a social, political and religious enemy.

On the other side, Catholics made up the other 1/3, mostly Nationalists, considered the land of Northern Ireland illegitimate and thought that the next step would be to recognise the whole island as an independent and united country.

Even though clash started centuries ago, tension started to rise as the gap between Protestants and Catholics grew bigger. Protestants belonged to wealthier families and higher social classes and therefore occupied politic offices and had wider access to the job market, education and health for their children.

On the other side, Catholics were invaded and excluded in every area to the point where they could not vote because in order to vote people had to pay fees and in order to pay fees they would have to have a job. Since Catholics had less access to job opportunities, they would not be able to vote.

I only know that 3,700 deaths on both sides and several generations of disputes after, there I was, trying to understand that complex web of religions, politics and social classes. 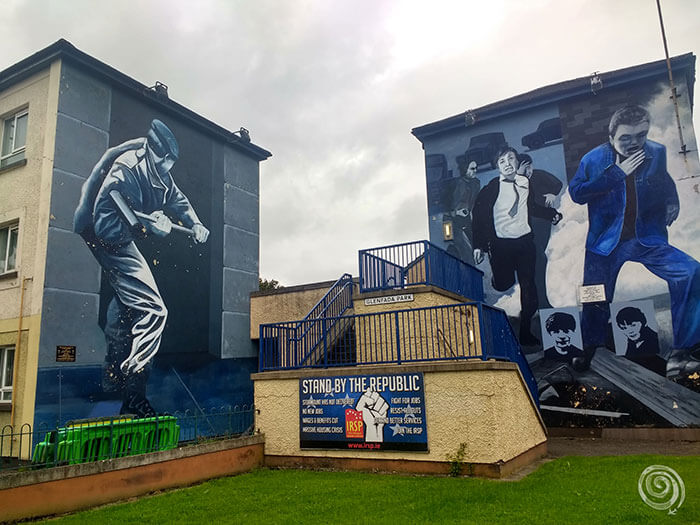 That same day I would discover that it didn’t really matter how I would catalogue it but the border between both countries was still really alive in the daily lives of Irish people and not that much in the ground I was stepping on.

Miles after not kilometres, I start converting the price of petrol from euros to pounds and accepting that I’m slowly entering one of the British countries.

Derry and its Propaganda: the Unionist Side

As soon as we arrive in Derry we immediately absorb political messages from both sides, sentences that stand out before our confused foreigners’ eyes.

We enter Derry by its loyalist or unionist side, so to say the ones that defend the occupation of this part of Ireland by the UK. UK and Northern Ireland flags and some scary propaganda are all over the place. 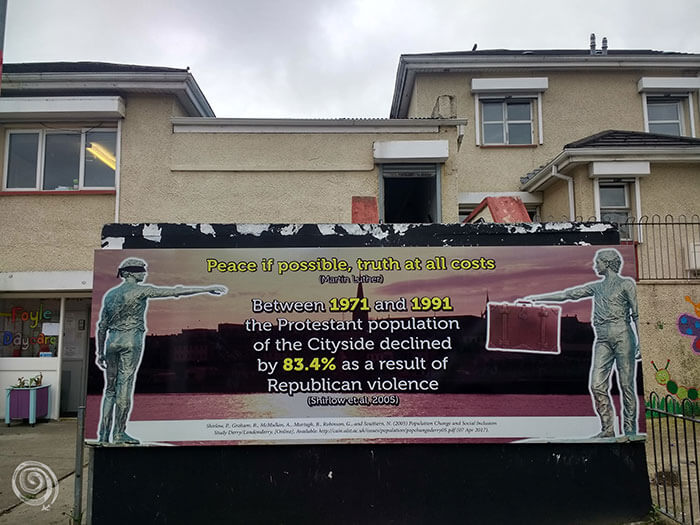 It’s very interesting how they turn the history over…

It’s not that there was no violence against Protestants but affirming and insinuating that they are the victims in the whole tangle is taking it too far. To start with, from the XVIII century Scottish and English people would be sent to the north of Ireland from the XVIII century as an strategy to not lose the island. Secondly, exclusion at professional, economic and educational level was suffered by Catholics and/or Nationalists only. 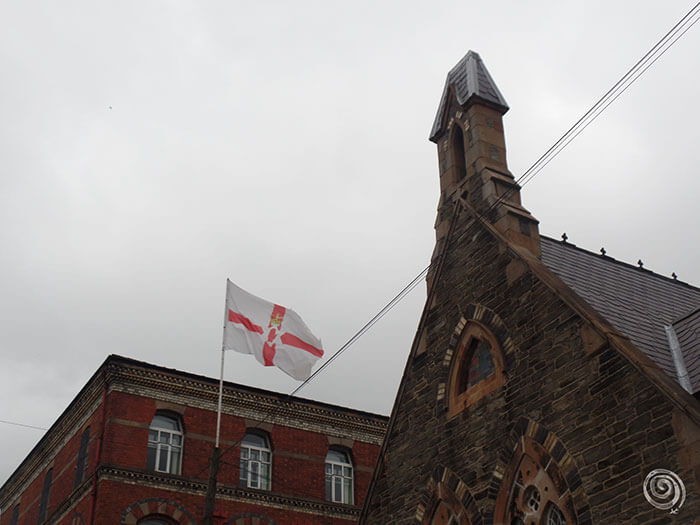 Bogside and its Murals: Nationalist Neighbourhood

We keep on walking downtown and go under the Derry wall in direction to Bogside, one of the working-class neighbourhoods, where Nationalists were displaced. Here it’s where a lot of fights would arise like Bloody Sunday in 1972, when British troops shot 13 people dead in a pacific civil rights protest. 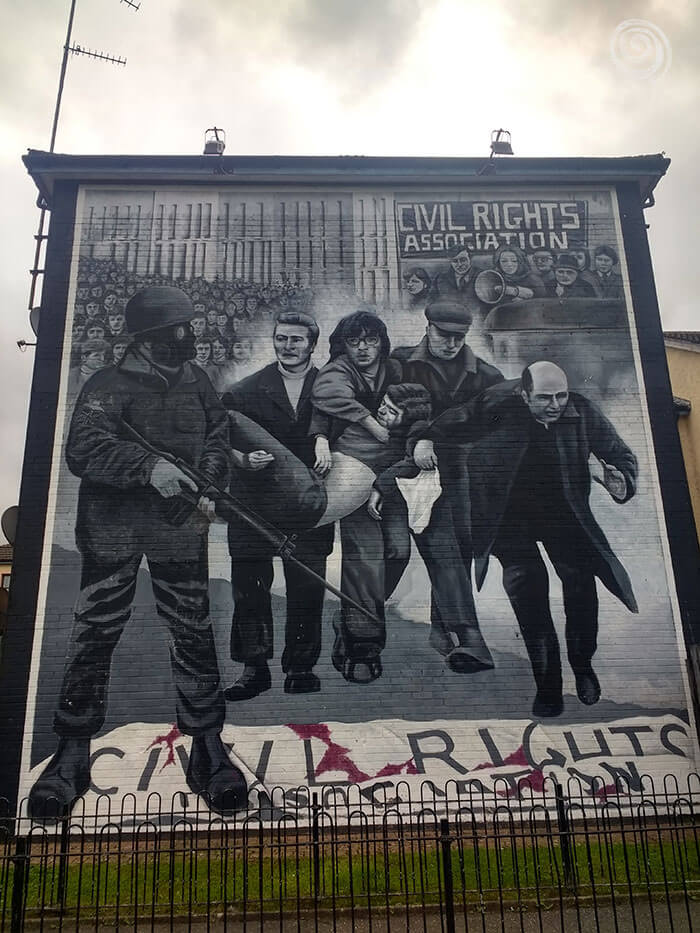 In Bogside we find the Free Derry corner, a mural that indicates the start of the subversive neighbourhood that got to proclaim itself independent. It’s here where neighbours would take turns to patrol the entrance so that British troops would not go in this free area. Today the mural changes from time to time to honour any struggle that is on around the world. 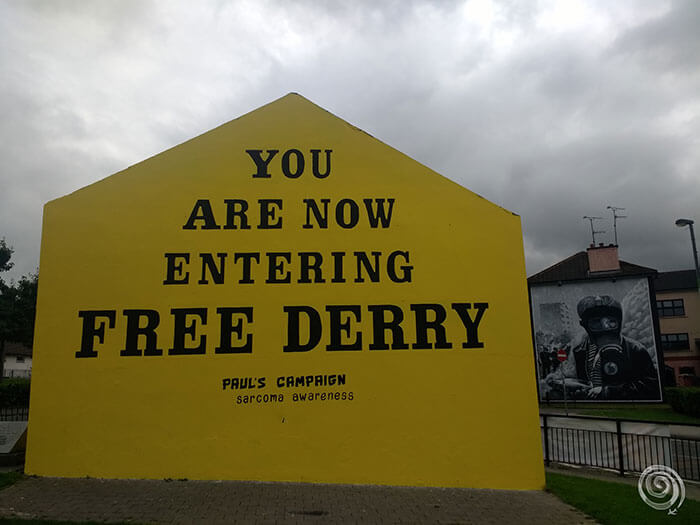 Phew, let’s take a break. If you got lost on the way, as it happened to me thousands of times, I’ll sum it up for you.

The energy of this area in Derry is that heavy I could even chew it. It was so that it gave me chills several times and I couldn’t imagine how life would be here in the 60s.

I try to orientate myself between messages of struggle, resistance and peace. Peace intermingles with invitations to being part of terrorist groups. International politics of apparently related external stories weave together with the complex history of this area.

I never quite understood relating your own history to other countries’ stories, rebellions and revolutions because it’s not our own country and we didn’t even live that part of history. I understand that different communities and associations look for support but it seems all we end up doing is to put people in boxes.

The Northern Ireland flag must be accompanied with the one of Israel, a wink to the occupation of Palestine, sometimes along the Ulster Volunteer Force flag, a terrorist group created to fight against IRA (Irish Republic Army) and basically kill Catholics. The Republic of Ireland flag together with the Palestinian one, revolution close to revolution. 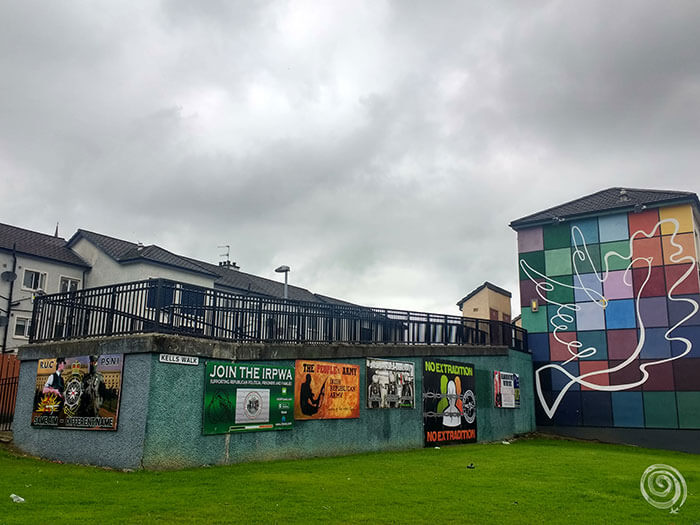 Keeping in mind that I don’t like flags but just the colourful one, I find it sad that people explain their own history basing it on foreign facts. We didn’t live that part of history and we don’t even know whether what we were told was true, so why defending it?

Plus, mixing both topics describes a lack of own criteria. We can be on the left-wing of politics and do not support certain revolutions or terrorist groups or be of right-wing and be more liberal than some that claim we are free to do whatever we want. It’s complex but not everything in life is black or white.

I leave Derry with a weird sensation in my body, a heavy energy inside of me and even some violent feelings. In Derry, one can breathe history and choke with it.

I really hope peace will come soon to settle in the minds and houses of Irish people. I really hope conciliation will draw near for the upcoming generations, for once and forever. 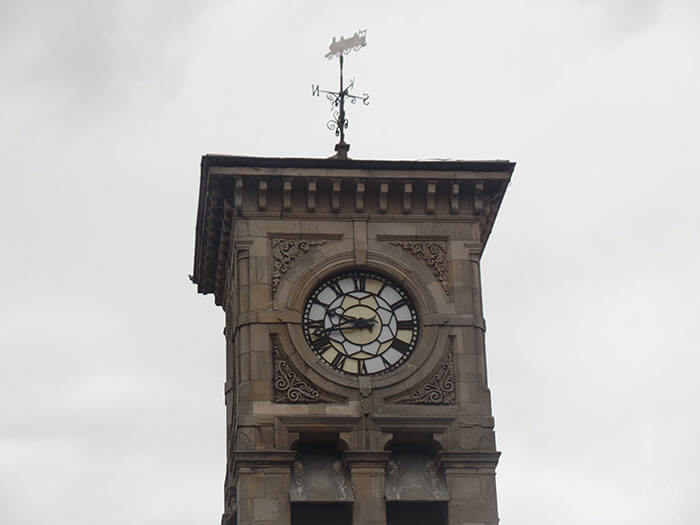 Derry echoes in my head but in reality this song is the one echoeing since that day:

I think the key is to never forget but neither to leave open wounds nor resentments.

Related posts
Caracas, you gotta visit!
Things to do in Ponta Delgada, the quietly confident capital of Azores
Street Food in Fes, Morocco

2 Replies to “Derry Echoes in My Head: a Trip Around the Past of Northern Ireland”