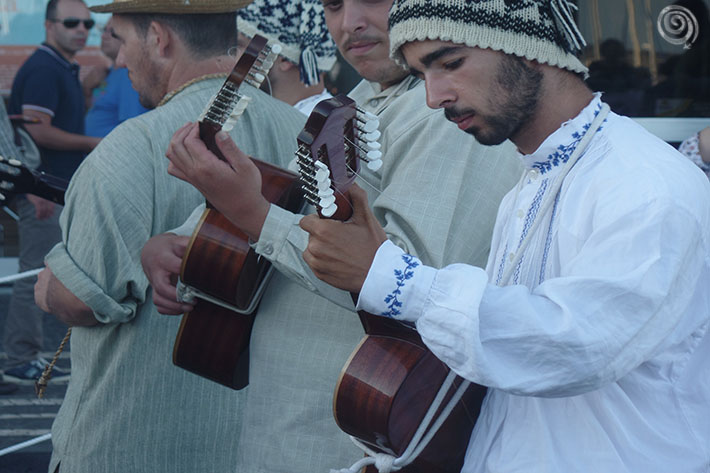 Ponta Delgada introduces itself as a Portuguese, with its cobble stone streets made of volcanic rock, its Manuelino style churches and its peculiar nostalgia. However, there’s something else that differentiates it from its siblings Lisbon, Porto o Sintra; and that’s its half Latino personality that shows big-headed in the streets.

It’s that strong personality that is summed up in tropical fruit, coffee and tea and pasteis de nata passion fruit flavour and in some regional festivals that dress up of bright colours. That’s Ponta Delgada, a fusion of two worlds, the capital of an island that bets on its traditions and at the same time looks to the future. 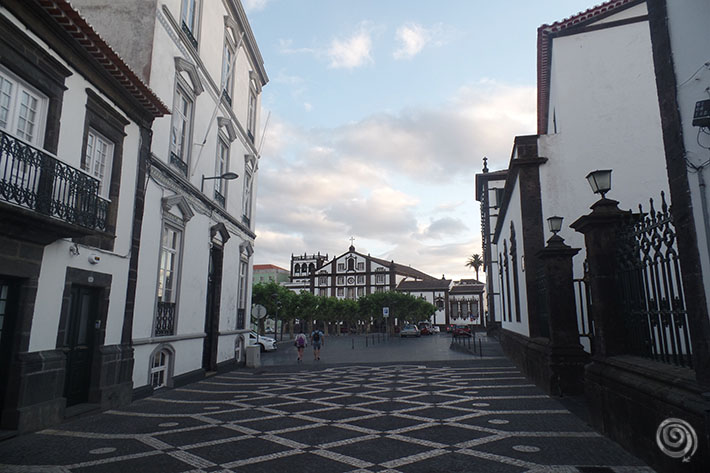 How to get around Ponta Delgada

The good thing about the capital of the island of Sao Miguel, is that you can walk everywhere. In fact going by foot along the coast, in the exit of Ponta Delgada following the promenade one can get to San Roque and some other nearby villages. Personally I loved walking through its streets, listening to its music and watching people going out to get some fresh air in the promenade and eating their daily icecream.

The regional hortensias (hydrangea) kindly and nostalgically take care of decorating roads and little corners of the city, that particular Portuguese nostalgia. They say they are planted in a strategic way around the island but I prefer not to believe it and keep on walking my way, ignorant but happy whatsoever.

Things to do in Ponta Delgada 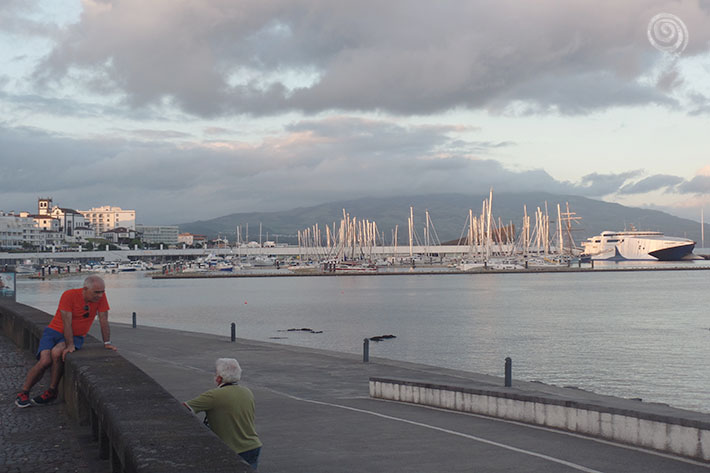 The promenade is a quiet place where any day can become a walk on Sunday with the mountains far beyond as witnesses. This is the spot to move around the island of Sao Miguel by public transportation because every bus departs from here.

Here it’s where we can find the city centre of Ponta Delgada; with the fort of São Brás, Portas da Cidade, the original doors of access to the island and San Sebastian Church.

Farther, in the port it’s where the excursions for dolphin and whale-watching depart. In addition, this is where the touristic movement and the local life develops like the religious Festas do Divino Espiritu Santo that we enjoyed in July.

Built to protect the charms of the islands of greedy hands, the forte of São Brás remains intact despite the passage of time so that locals and tourists can enjoy it, now turned into the Military Museum of Azores. 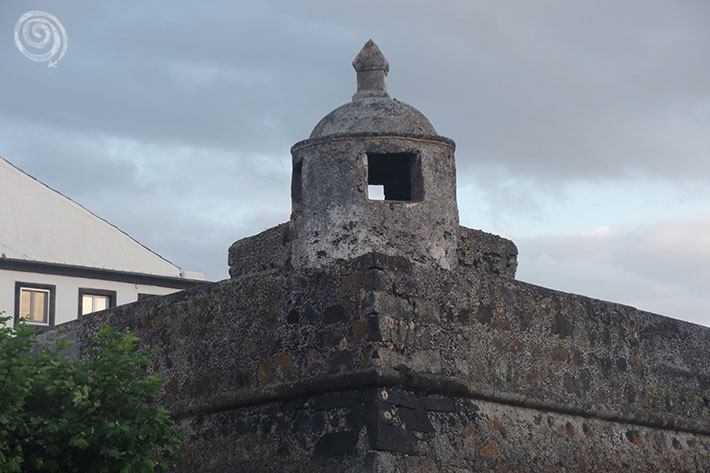 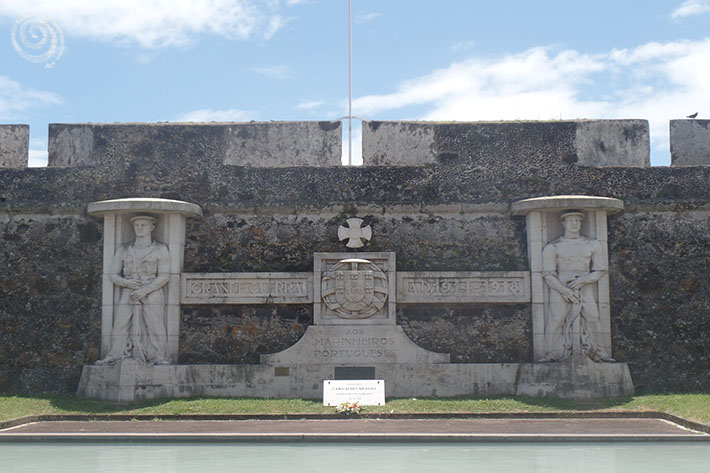 In the market we can buy food, arts and crafts and even seeds of local flowers. O Rei dos Queisos (the king of cheese in Portuguese) located just before going inside the market is the ideal shop to taste the different kind of cheese that there’s in the islands so that we decide which one to buy, or ones in my case.

Yam, pineapple, custard apple and sweet potato dance to the tune of daily life in this market where locals and tourists come unequally.

By the way, I loved the juice bar at the end of the market where one can buy freshly squeezed juices made of local fruits like pineapple, orange, passion fruit or everything at once.

Urban art in Ponta Delgada is sometimes discreet, sometimes hard to find and sometimes breaks out the big guns. 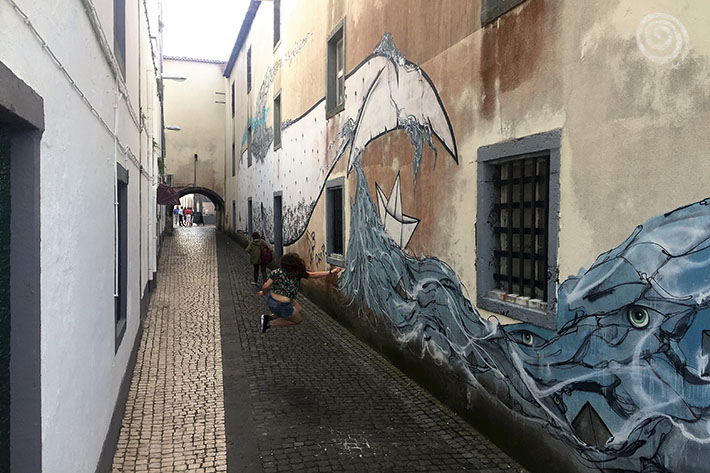 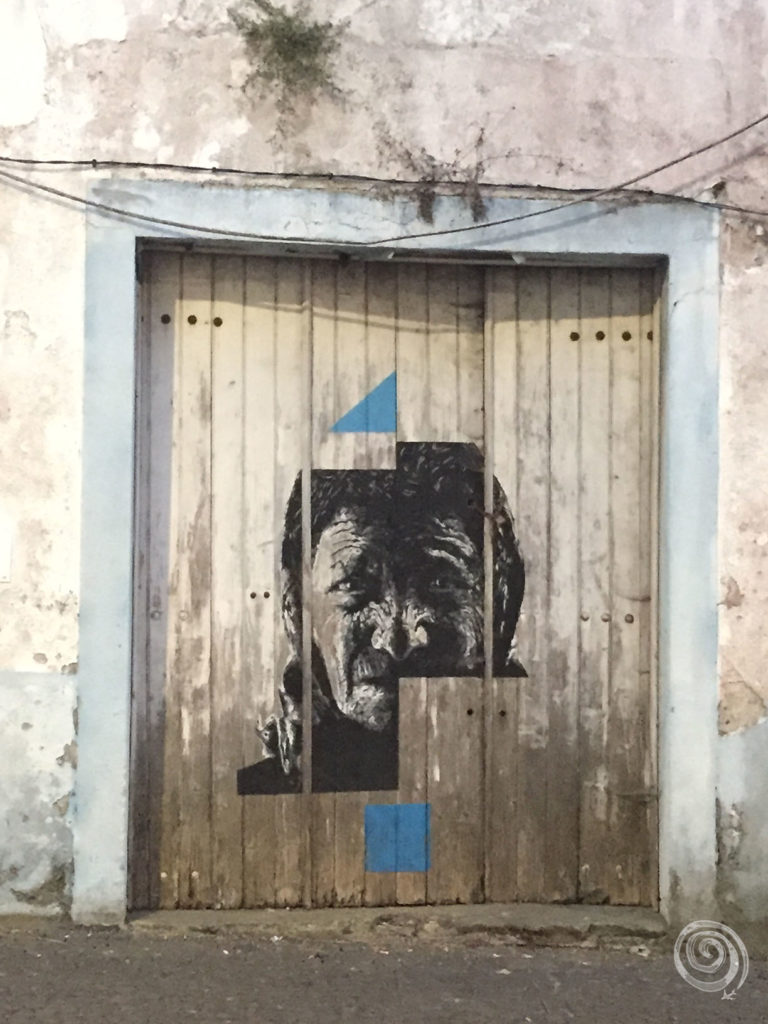 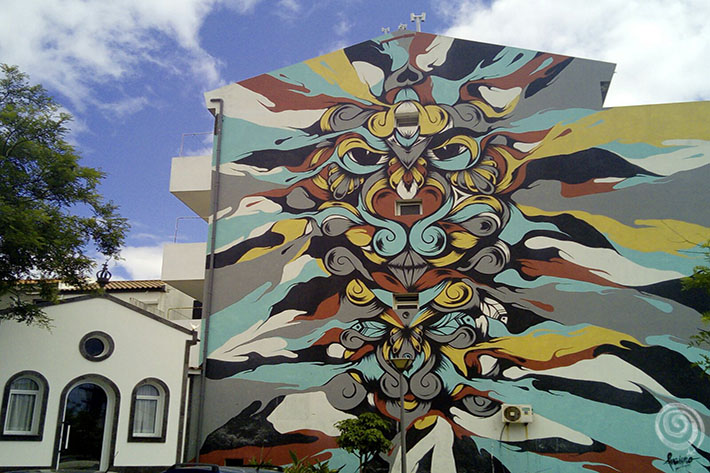 Praça do Municipio, the city hall of Ponta Delgada

We were lucky to visit Ponta Delgada during local festivals, the so-called Holy Spirit festival. For these dates the town hall and surroundings are decorated with flowers and ferns. 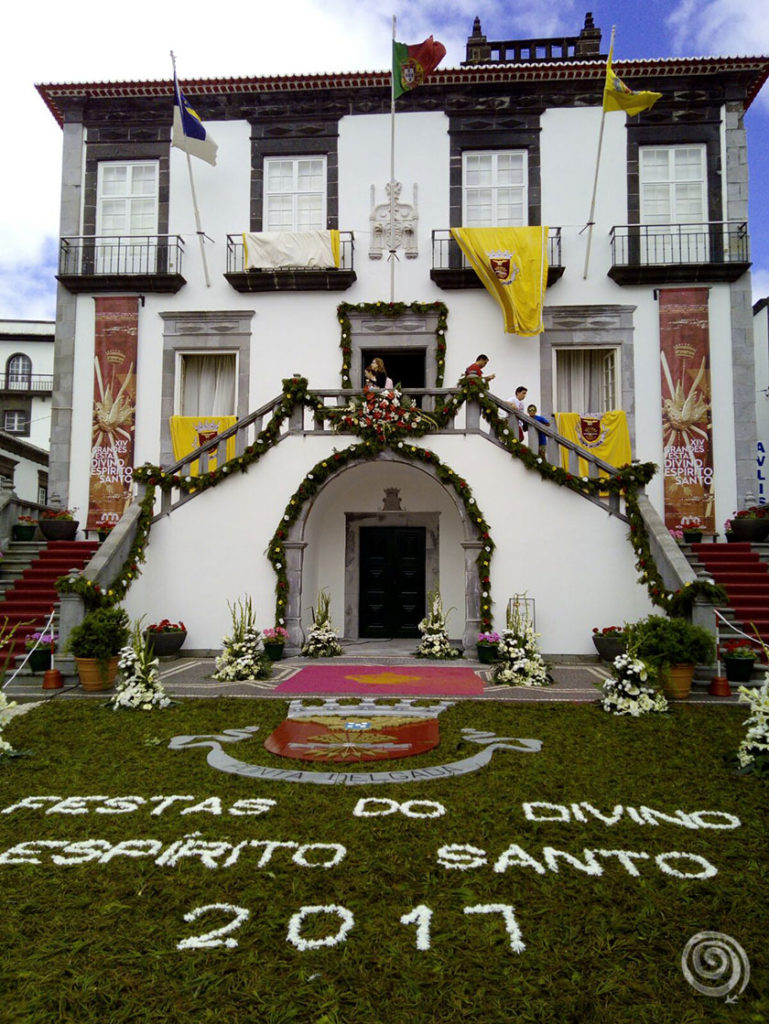 Around those dates, from the 7th to the 9th of July, one of the rooms in the council is decorated with the crowns from different town halls of the island of big pride to Azoreans and a King-like gown for the festival organiser to wear it. 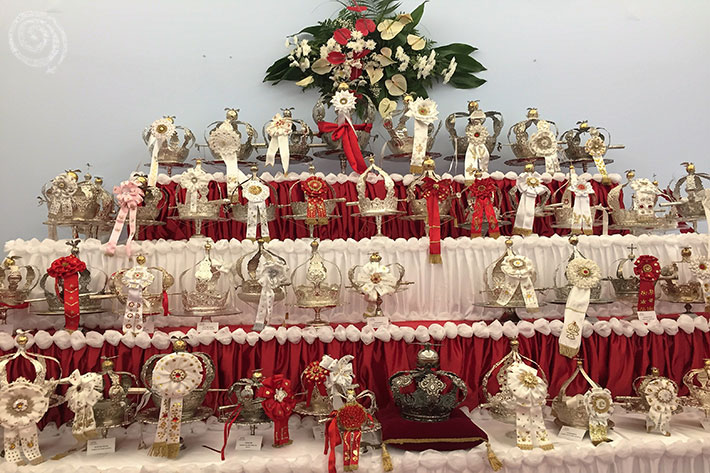 A lady that was born in the island and migrated to United States in the 50s and had come back on holidays to Azores kindly told us the reason behind this celebration. The conversation derived into a pleasant chat about  traditions and Azorean culture and the massive migration of Azoreans to United States in 1952.

This anecdote takes me to connect the place to the history of the island that suffered a strong migration in this period due to scarcity, extreme natural conditions in the island and the search of better life conditions. In fact migration dates back to the beginning of the islands and is still alive nowadays.

It’s estimated that a million US citizens are native or descendants from the Azores. As a symbol a statue reminds us in one of the praças that the migration from the Azores Islands wasn’t easy, as it never is. 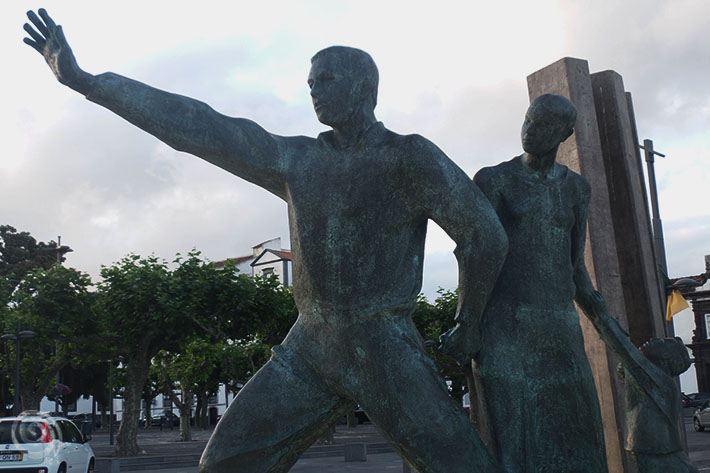 Portas do Mar: the natural pool of Ponta Delgada

Last but not least, what about going swimming without leaving Ponta Delgada? Just behind the port, in front of As Portas do Mar there is a free public swimming space where locals sunbathe and dive in the cold Atlantic Ocean.

Portas do Mar also has a summer pool, a children’s playground and some gardens. Besides that, it’s the place where cruises arrive to the island of Sao Miguel.

What to see around Ponta Delgada

In fact one can get two know Ponta Delgada in two days but it serves as a point of departure for daily excursions around the island of Sao Miguel.

Related posts
Times Were Different Back Then
Idioms that Only Venezuelans Will understand
What's Your Favourite Place?

2 Replies to “Things to do in Ponta Delgada, the quietly confident capital of Azores”