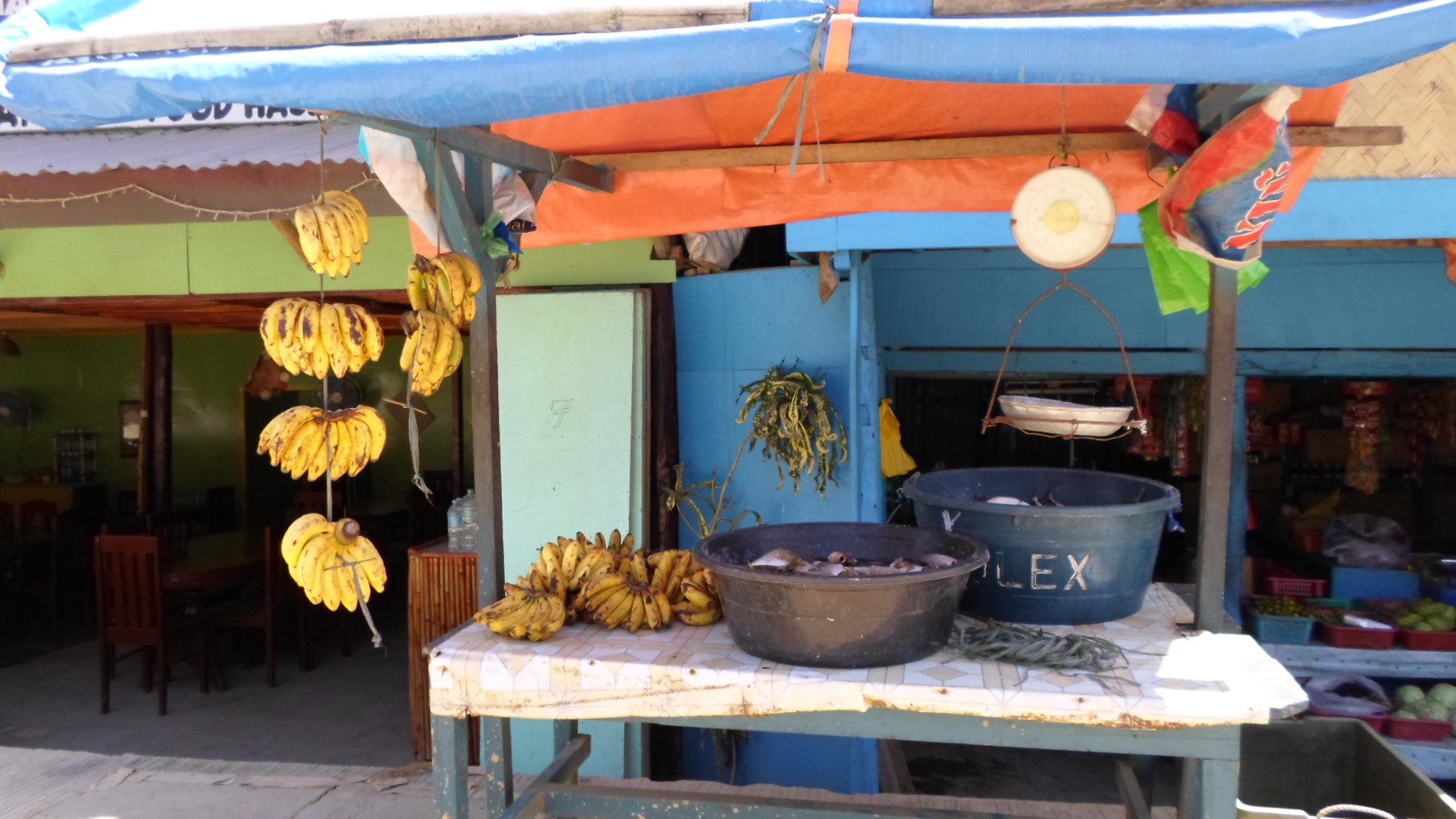 Should we visit very touristic places?

This is the story of my trip to Sabang, land of endless sea, waterfalls and unexpected adventures. I didn’t know whether to finally go or not for they warned me it was a very touristic place. It is such because it hosts the longest underground river of the world. It often happens when I travel that my eagerness to avoid the touristy crowd and the one of going to an unequealled place come into conflict with each other.

This time I decided to give it a try and I joined the mass. Different touristic packages were offered for sheeps that go after each other. All my respects to whoever likes to travel this way but I went on my own, with local people.

Trip from Puerto Princesa to Sabang (the Philippines)

I took a van, in which there was space barely for ten people, from Puerto Princesa to Sabang. It took us around five hours to get there but the trip was marvelous, the little villages we stopped by and the landscape were astonishing, of green and brown color, that got mixed with the typical houses, made out of bamboo wood. 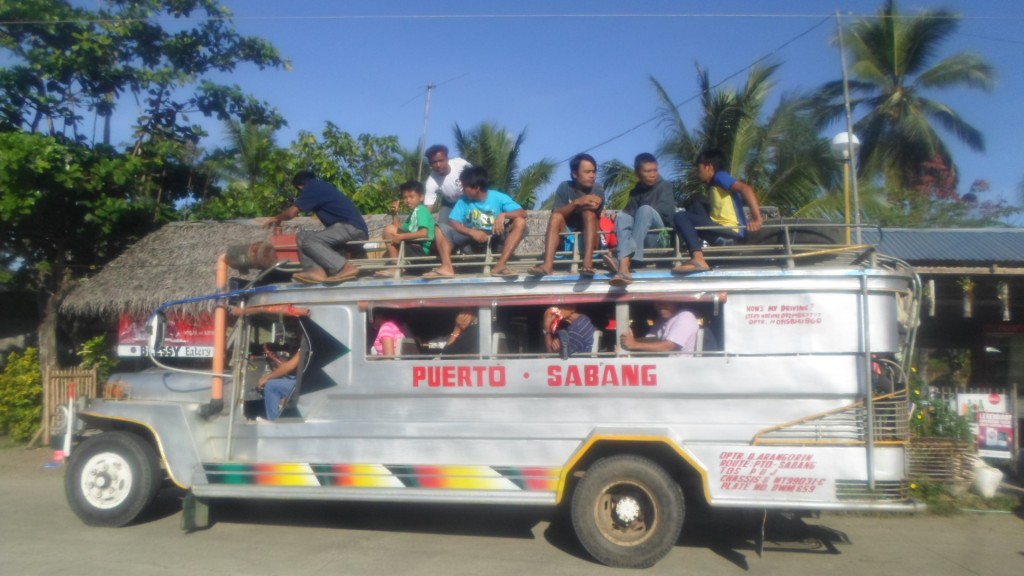 And there I was. The village entry is quite obvious and attractive for tourists. The first thing one needs to do when entering the zone is going to the environmental office to pay the fee that allows tourists to visit the underground river (after having paid another fee in advance in Puerto Princesa). 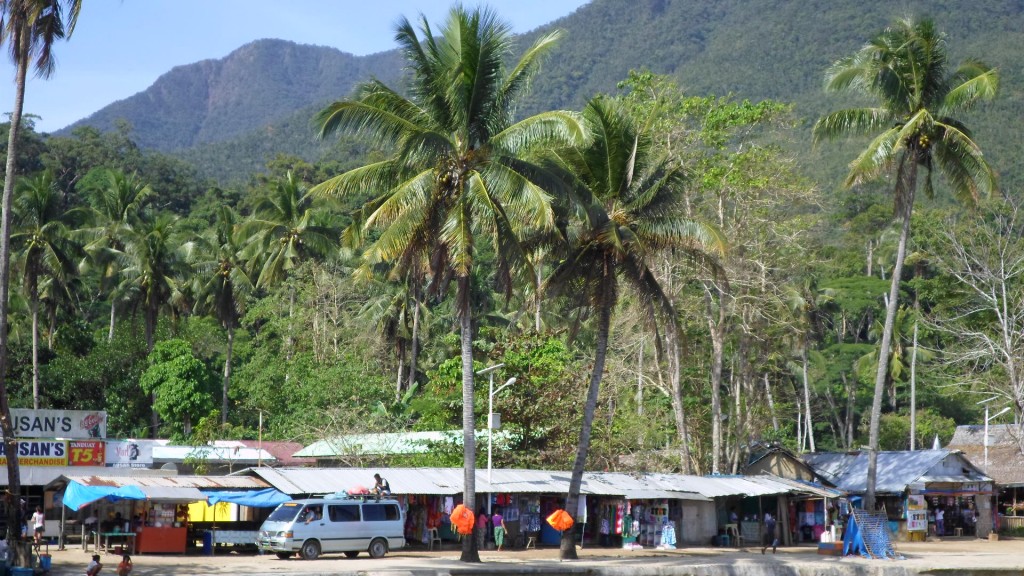 After paying it I go to the pier. It’s really packed with tourists wearing funny hats. I approach a boatman to negotiate the price for going on one of the boats (the rest of the tourists paid it already within the package). While some American, Italian and some other specimen are posing for pictures with their strident orange life jackets, I observe my surroundings. I wonder if they are able to see what I’m seeing right now and if they can even appreciate it.

These colours, the people, this landscape… 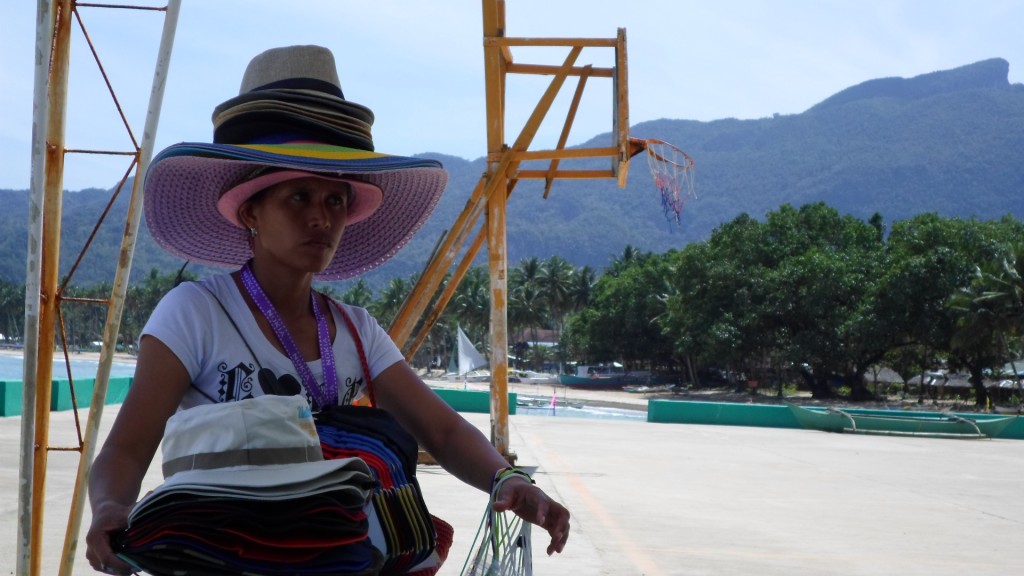 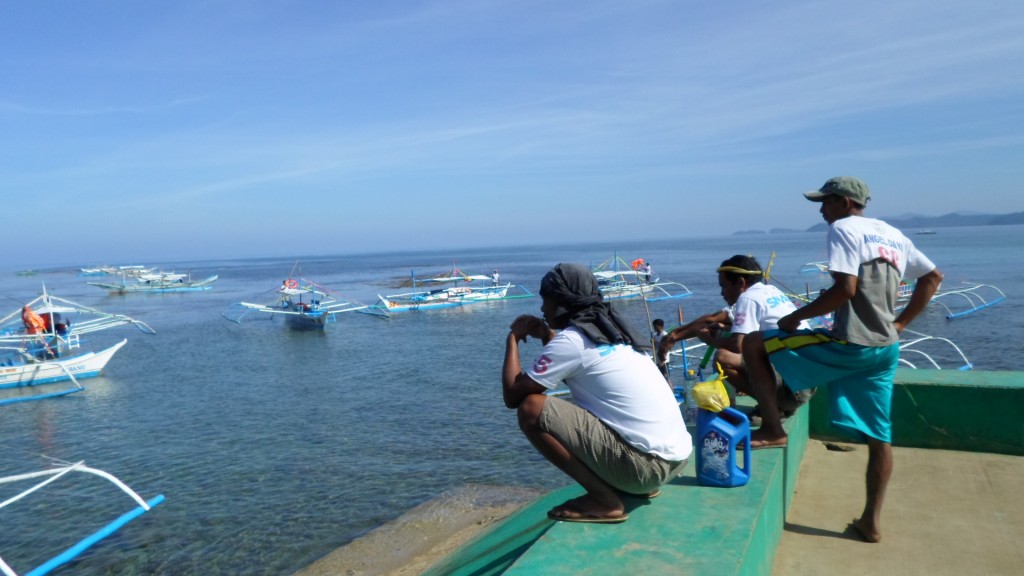 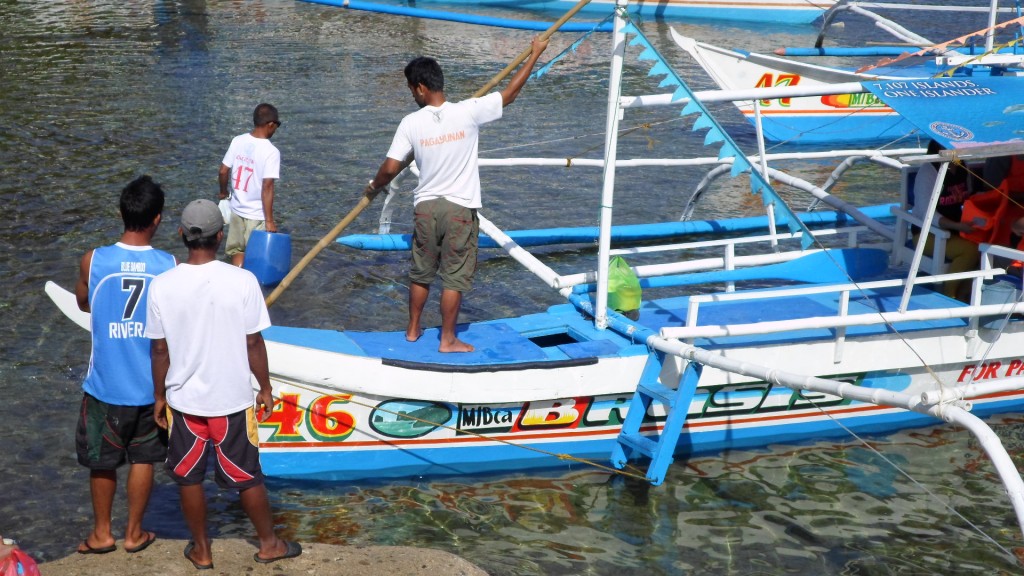 Life jackets on, we get on the boat. I refuse to be one of them and I tell myself, ‘enjoy this landscape even if the orange tide disrupts the view’. After some minutes of natural beauty or suffering minutes for the Italian man who insisted on having everything recorded on his videocamera, we arrive to the destination.

Sabang, the village where the longest underground river in the world flows

In the entrance a billboard reminds us that we have reached the Underground River, stated as a World Heritage Site by UNESCO. If you still don’t have it clear go ahead and join the orange plague of stupid pictures, where all kind of shops welcome you.

Well, I keep on walking, on a wooden path, designed just in case any delicate tourist gets its precious feet injured. And that’s when we come across some monkeys and the show starts. People run after the animals to touch them, take pictures or even shout at their faces. It’s hard for me to distinguish who’s the human here.

I try to escape, I walk and finally I find the wonder I had come to see. The turquoise color of its waters charms me, the shape of its rocks and the faded cave in the background…

“Quick! follow your group! take your helmet and go to the line!”

“Wait, what’s this? Am I in the market?”, I ask myself still confused.

What a way to break the magic! People keep on taking pictures like crazy, pictures to stones, to the sand, to their kids with a helmet on, all of them hurrying because there’s no time, no time to enjoy this unique setting.

And I say to myself, there’s no way they will ruin my moment. Calmly I get on the boat, which is smaller this time. The orange wide is still there, everywhere I look at there’s an orange or lifejacket that bursts in the idilic landscape, without asking for permission.

We penetrate into the cave, the boatman is quite nice, he tells us about the different shapes the rocks have taken along the time while he lights them with his magic lintern. And the Italian man on an on with the camera. Estooop, estooop! he would say continuosly so that the lintern man would leave it wherever and whenever he wanted in order to have that unique and dark moment in his camera. I wonder what kind of video he’d be showing back home. 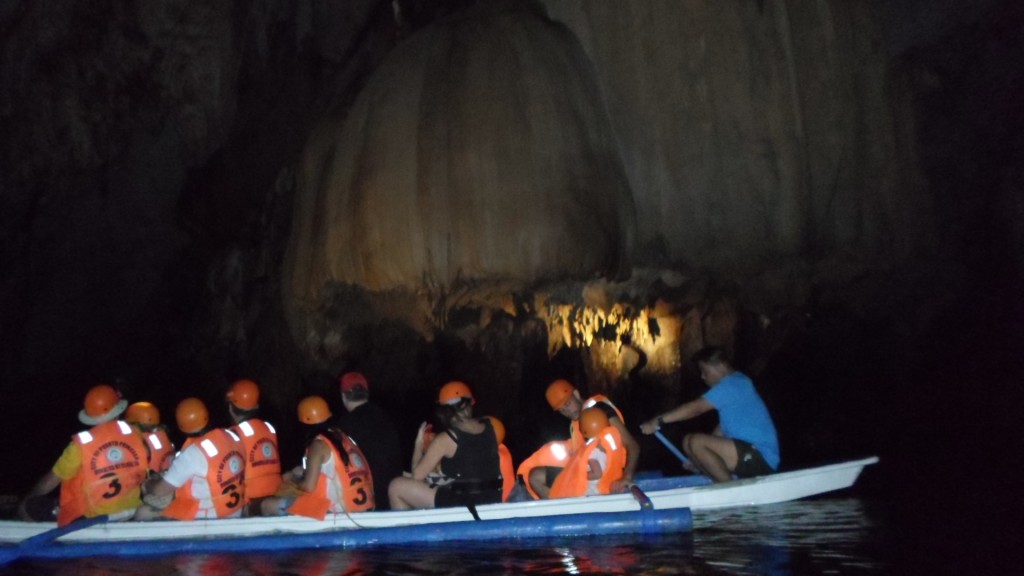 Mai tu sei brava! the italian woman tells me (yes, the cameraman’s wife) when I tell her in my poor Italian that I’ve been traveling around Asia for six months by my own.”I would also like to do it! but I’m afraid”, she adds.

The boatman tells us about the species that live here, we see a lof of bats and some paintings of people who discovered the cave (this is quite creepy, by the way).Even if I had been to several caves before I must admit this one impressed me especially by the height of one of the spaces for it was 30 metres high!

I don’t know about you but these kinds of places give me shivers. All dark, bats everywhere and who knows how many other weird creatures await in its waters… The tour lasts for around fourty minutes. When we go out the boatman smiles at me, victorious, we are safe and sound! 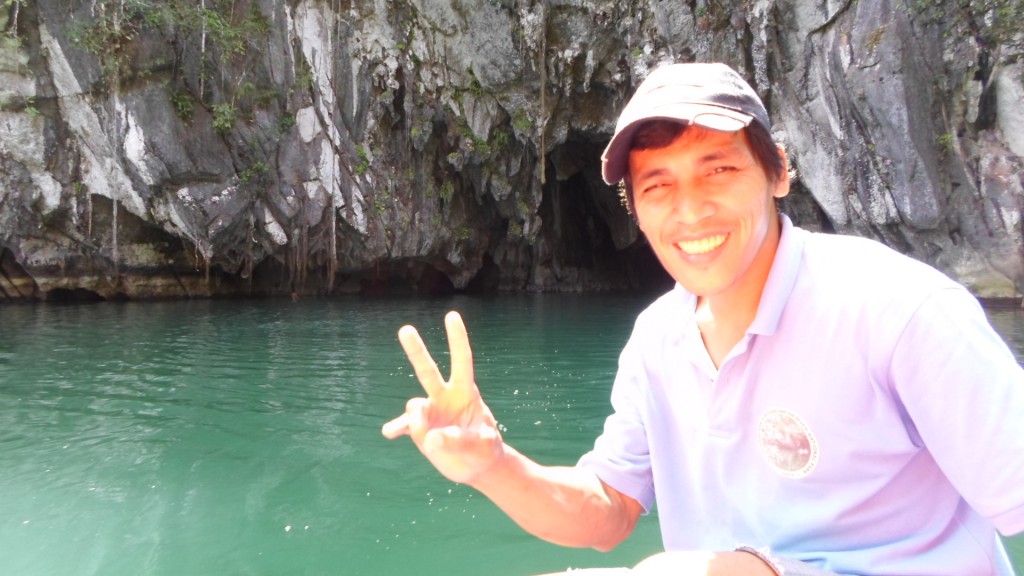 On the shore the next group is waiting, willing to take their cameras to shine, anxious about telling their acquaintances or publishing it in social media. I leave the helmet, take off the lifejacket and go around to explore, there must be a place with no tourists.

I hurry a bit, we’ve been told we only have some minutes until we sail off again. Some minutes to go to the toilet, to buy souvenirs or take pictures with monkeys. I’m off. Just behind where all the crowd is there’s a place without a deafening helmet or a disturbing lifejacket. Only nature. Just as it was before they transformed this into a massive touristic destination.

The boatmen are so relaxed, looking at tourists go by, taking them from one place to the other. What would this man be thinking of? 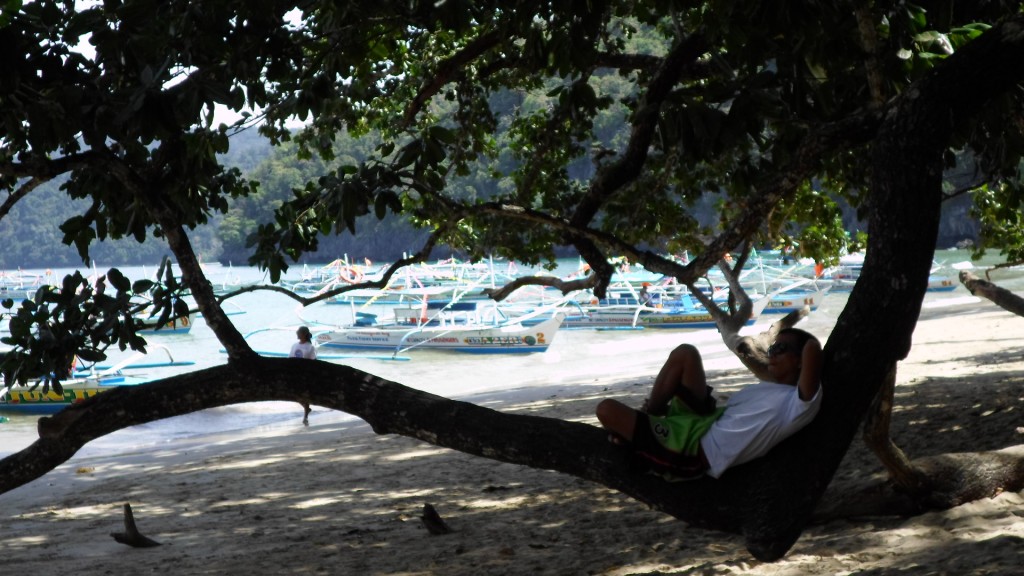 And here we have the typical photo as a tourist (the Italian couple forced me to do it) There was no way out. 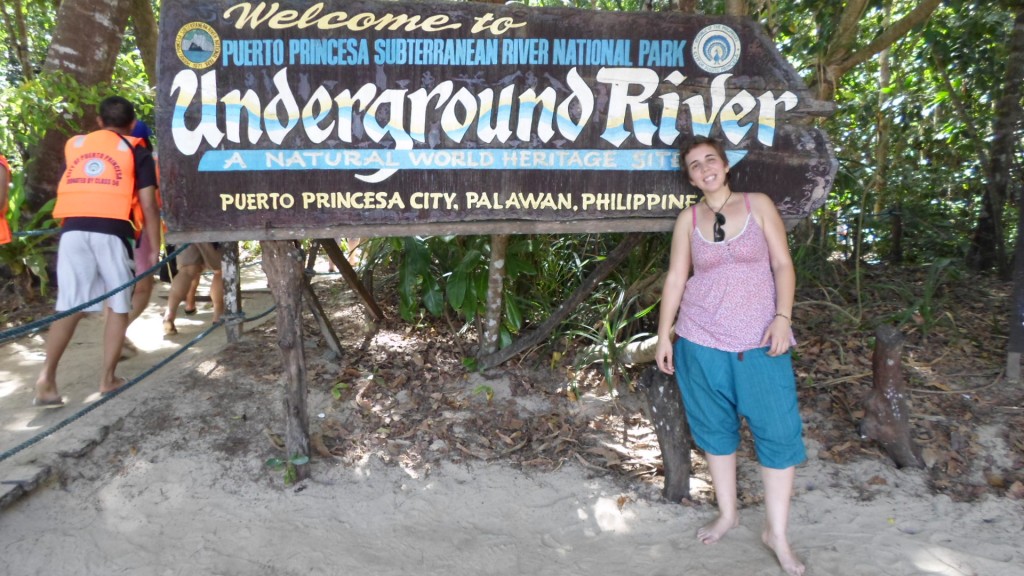 We get on the boat again and go back to Sabang, the next adventure begins. I need to find a place to stay for the night though judging by the touristy of the place I don’t think I’ll have any problem.

That’s something I’ll tell you more about next day. Meanwhile I’ll leave you with an idea/dilemma about which this trip in particular has made me reflect once again:

Tourist or traveller? Does it really matter?

Advices to travel to Palawan

6 Replies to “To go or not to go, that is the question”