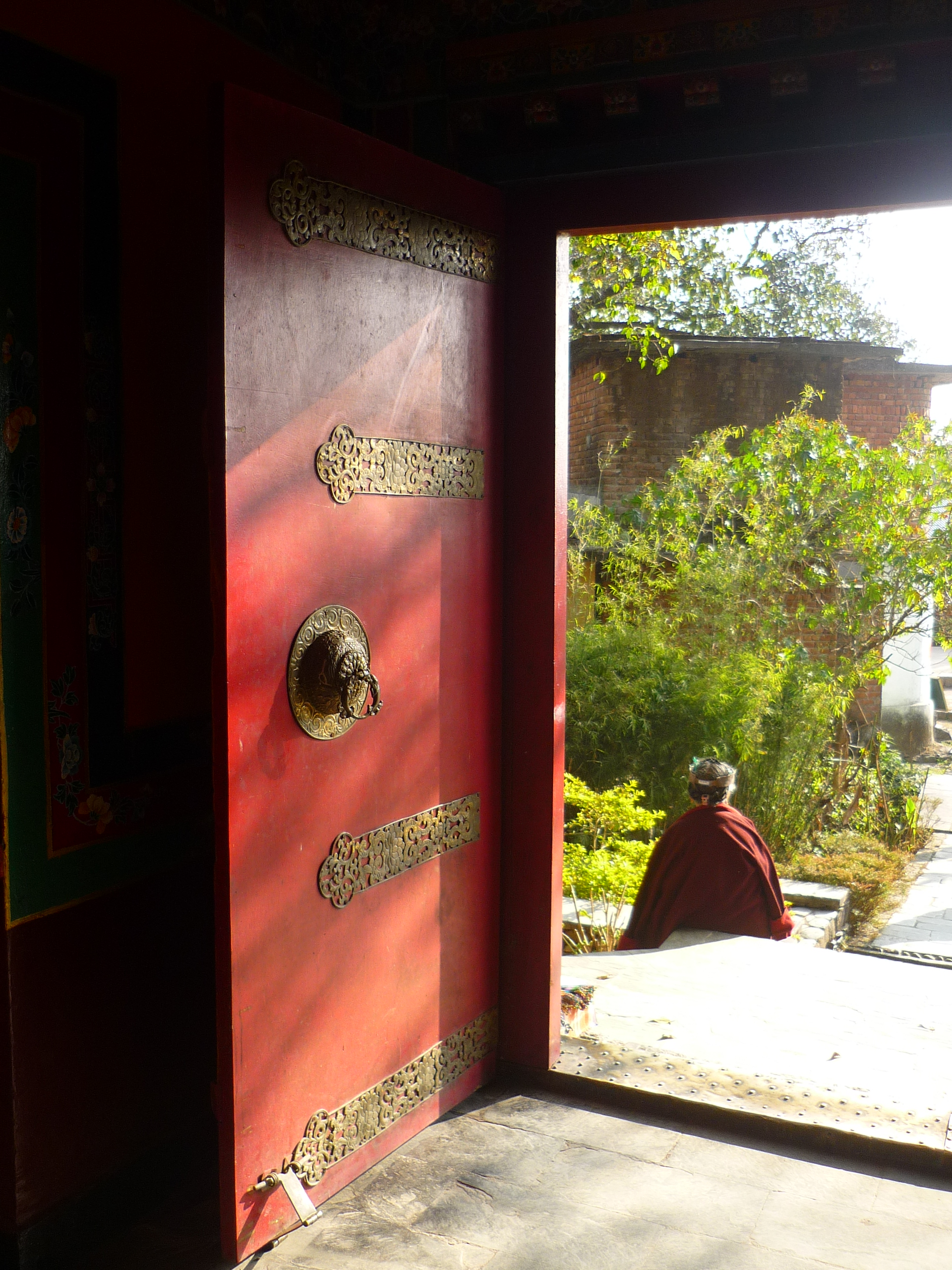 Christmas is certainly that time of the year when we go over what we’ve done along the year such as plans, new jobs, breakups, births, deaths, shocks, illnesses, dreams, hopes…

Gratefully, I not only look at this year but at the ensemble of months that made up my trip around Asia. Because for me this trip dismantled my mental distribution of time, it messed the order of what it was supposed to be spring, summer or winter to me.

Although in the end, it didn’t matter.

Where am I? is it supposed to be winter? I would ask myself in August 2014 when I felt winter was going to come. I was ready and confused.

Nevertheless, some months later, around November I was like, where’s my summer?

It took me some time to get acclimatized but I did, as I always do.

December is by far the month of reflection. We think, analyse, compare with previous years and learn from mistakes. However, all I’m able to do this year is to remember my trip, that fabulous and life-changing venture that luckily took me to five Asian countries.

I look at it like it never happened, so far away, so distant, so unapproachable. But it’s there, and it did happen.

One year ago I was in India. Oh, India!

Vandana, see you in India

My Indian friend Vandana, whom I met in Czech Republic volunteering as a language teacher, was back in her home country and because I was travelling around Asia I figured I had to pay her a visit.

So there I was in Delhi and from Delhi we took a bus to Dharamshala. To my surprise we spent Christmas Eve cooking some vegetarian food at home and having some drinks in an interesting bar where a Tibetan Santa was dancing to the rhythms of Michael Jackson.

Weirdly enough, I had a great time far from consumerism and boasted celebrations from nowadays’ society.

Away from forced gifts, abundant meals and fake happiness.

I spent a few more days in Dharamshala, a magic place to be.

I thought that year Christmas would be different from what I was used to, under a tropical weather at the beach for instance. Ironically, destiny had a surprise for me, to spend those days in the beautiful mountains to the North of India.

Interestingly enough, they would be my first ‘white’ Christmas ever. 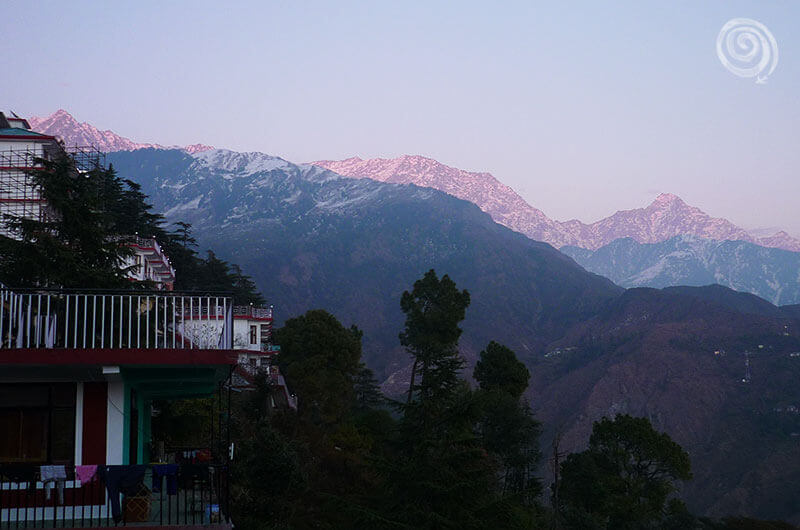 We spent Christmas day doing the parikrana, a Buddhist ritual according to which people go around the temple while spinning prayer wheels where the mantra Om mani padme hum is written. A rite that gave me so much peace and calmness. 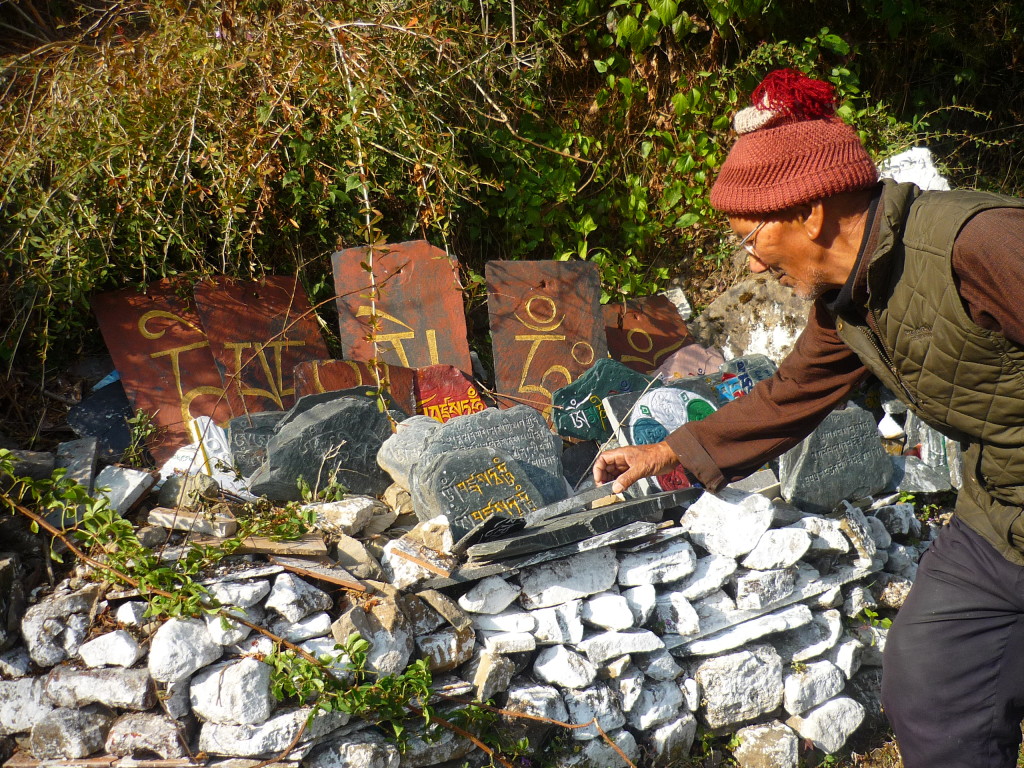 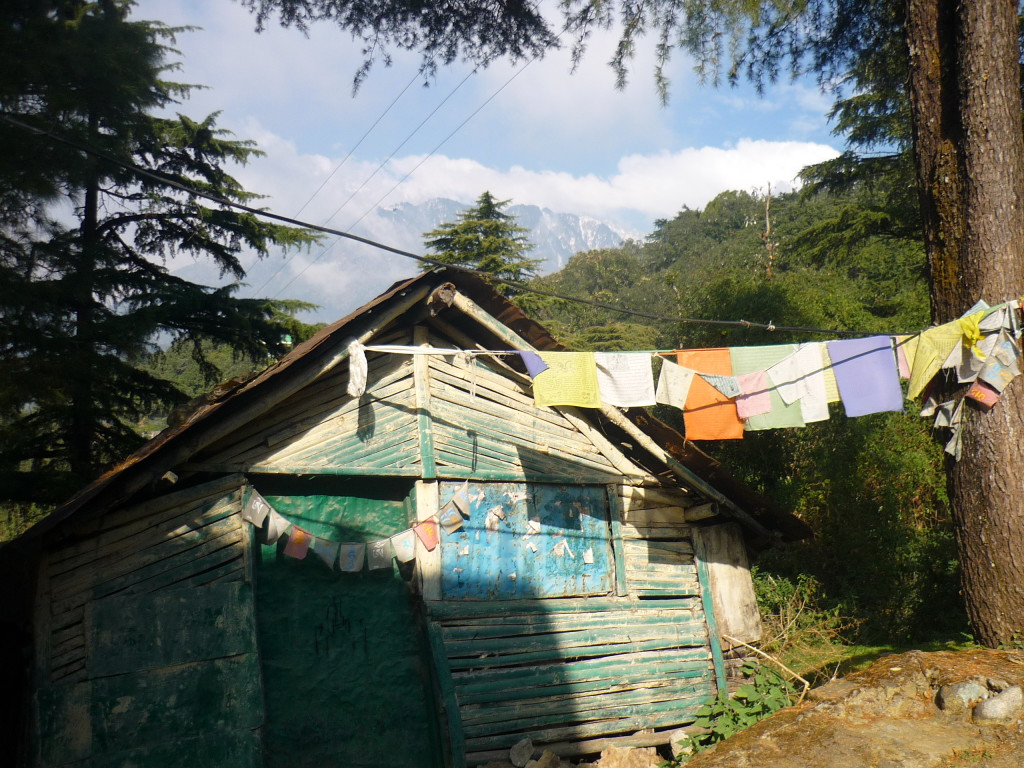 We had some Tibetan food, that was delicious by the way, and kept on walking and exploring. 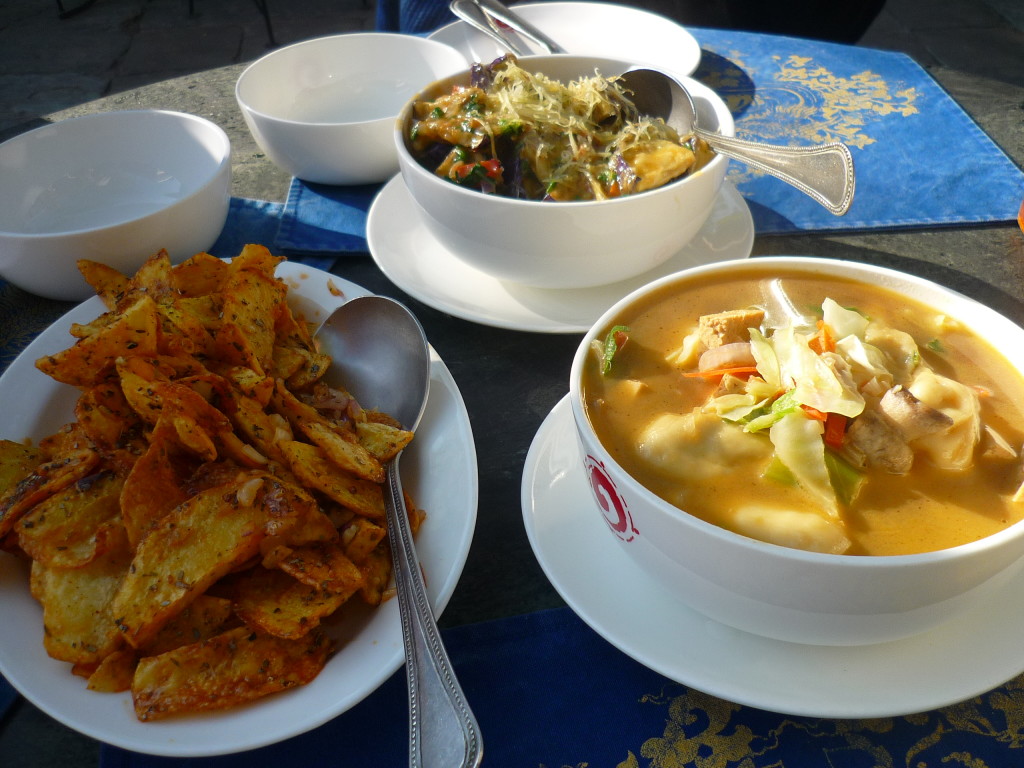 The day after Christmas we rented a taxi and went around the Dharamshala area. Hari, a funny character, was our taxi driver for some days.

My friend told me that he even had his own movie that talks about his arranged marriage and how he meets her on the phone, to whom he talked every day. You can check the trailer here: When Hari got married.

I reflect in silence about cultural shocks and how curious differences between countries are.

I’m happy looking through the window, observing unique landscapes, smelling Indian scents and especially by being there. Being absolutely in that moment.

We visit several places on our way; a Buddhist female nunnery, a Hindu temple and a few Buddhist temples. Each one as interesting as the next.

Amazed by the colours, the rituals, the landscapes, I keep on walking. 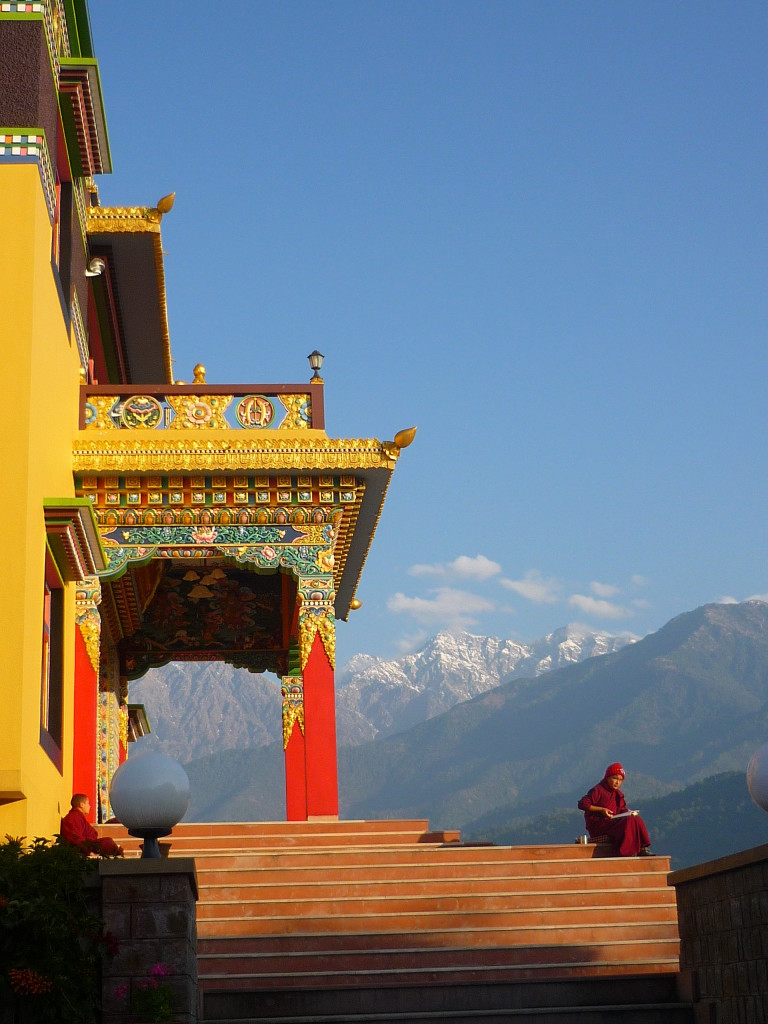 I go inside the first Hindu temple I visit, The Baijnath Temple, dedicated to the deity Shiva. We take off our shoes before coming in, get rid of any clothes that are made of leather and get in.

The Nandi bull is one of the most venerated deities for Hindus for it’s the animal that’s associated with the Lord Shiva, his mount, his vehicle. Nandi Bull was a great devotee of Shiva and his gatekeeper that’s why in every Shiva temple you’ll find an image of Nandi, generally seating and facing the main shrine.

In this temple is where I had my first Charnamrit Prasad, the holy drink that’s offered at the end of Hindu prayer meetings in temples. It’s made from curd, milk and Ganga Jal (the sacred Ganga River water). It’s served directly onto the right cupped palm, held over the left cupped palm and sipped from there.

Then we moved to another Tibetan monastery where there were several monks around.

A magic way of closing up Christmas, enjoying the diversity and charm of India. My next challenge was waiting for me: to spend ten days in silence and meditating.

In order to arrive to the meditation centre I would have to travel by bus for a whole day. It may sound like a lot, and it is, but in India is actually nothing. Nothing that a few Bollywood movies or Indian music at full blast can’t solve.

I was planning to leave the 30th of December so that I could be at least a day in Delhi but unexpectedly we missed the bus so my trip had to be postponed one more day.

That means I would have to travel by bus, at night, on December 31st. December. In India. By bus. Yes.

It wasn’t the best way to celebrate it (or maybe it was) but that’s how it was, different and without a doubt a story to remember for life.

Last but not least, here you have a poem I copied from the book Kora by Tenzin Tsundue, related somehow to this experience. 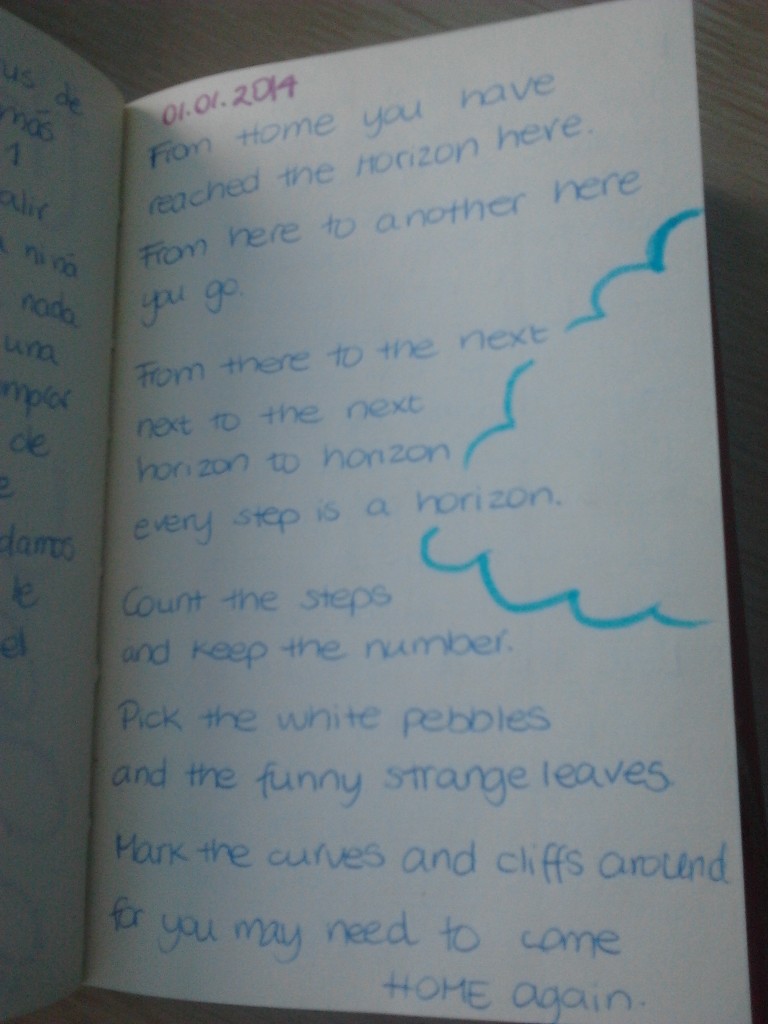 May you have a Happy New Year!

Related posts
5 Curiosities of Southeast Asia, Connecting the Dots
Oops, I Got Stuck in Thailand!
Street Food in Fes, Morocco