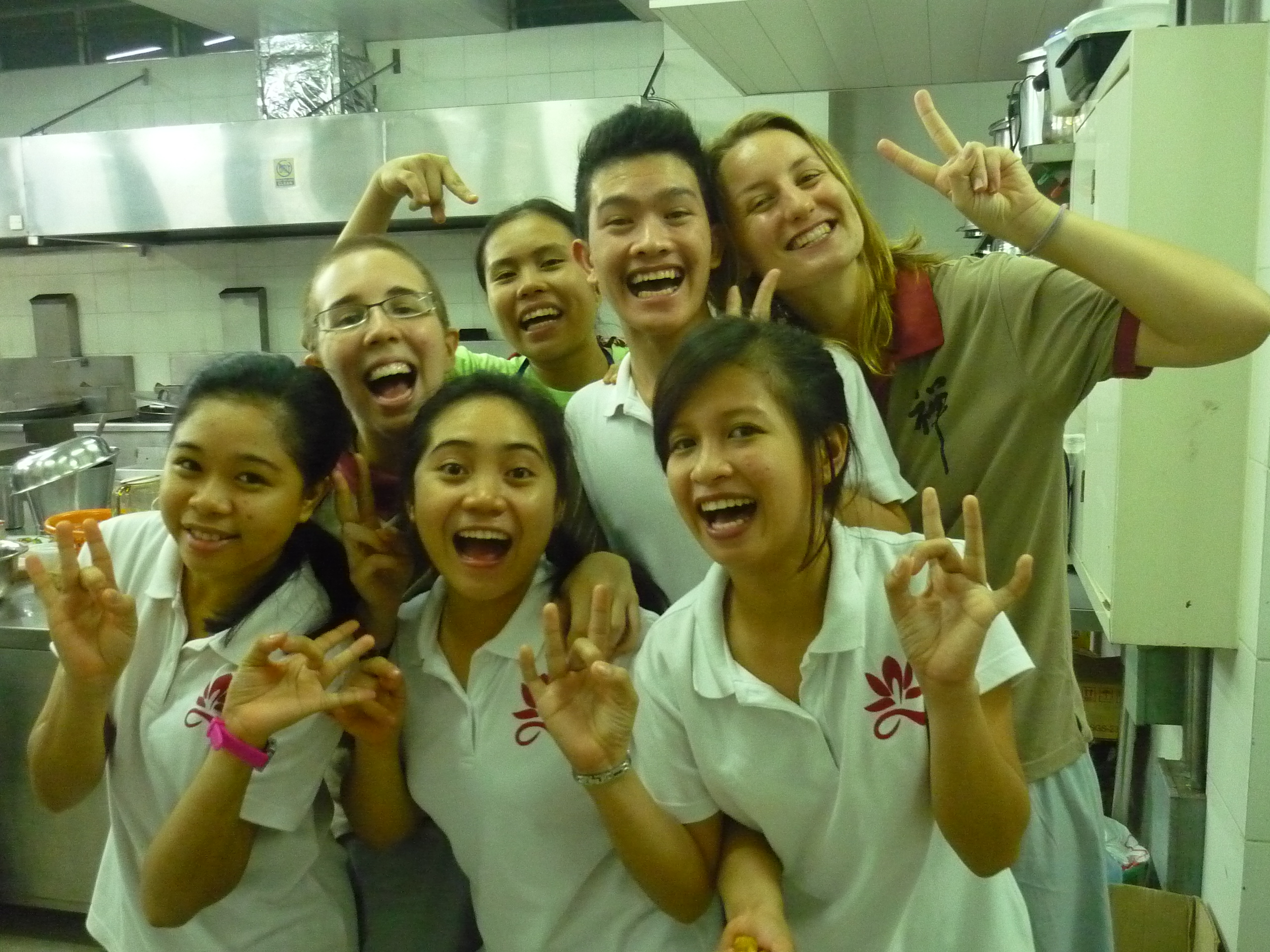 My Love for Filipinos

The Philippines is the third country where I’ve lived the longest after Germany, where I lived for one year, and Spain my home country. The fact that I stayed for a long period of time gave me the magnificent opportunity to observe Filipinos quietly and without rush. And I must admit that I love it!

Similarities between Latin America and the Philippines

At the beginning of my stay I was quite confused, “am I in Venezuela again?”, I would constantly ask myself. Apparently my mind was trying to convince me that I was in Latin America because it was observing and trying to find an explanation and match it with something I had previously seen.

It was very similar to what I experienced in Venezuela at first but with a funny and interesting language in the background! Colourful means of transportation, more relaxed and layback behaviour and a live-in-the-now culture were the first coincidences I came across.

The more I stayed, the more I connected the dots between Venezuela and the Philippines and my culture stayed in the middle, pretending to be a bridge. It was very interesting to discover the influence Spanish culture had on Pilipino roots. I’m not going to get in political or historical facts because I want to focus only in the good part of it which is the one I enjoyed.

Getting to know Filipinos will be an easy task if you are open and willing to know them. They are very friendly and will come to talk to you and will want to know about you.

If you are Spanish they would probably smile at you, especially the old generation and say: ¡Español! ¡yo hablo un poco! (Spanish, I speak a bit!) a fact that I found very cute and attentive.

These are some of the facts that I noticed from my own experience, from the four months that I stayed in this beautiful country.

Filipinos always have a smile on their faces

Always. If there’s something I truly miss back home is having random people and strangers smiling at me whenever I get in a shop, while talking or just in the streets! It’s not such a difficult action and yet creates a comfortable and nice vibe all around.

I absolutely love this fact in particular. Even in the midst of natural disasters, poverty and corruption, Filipinos can still afford to smile and joke around. Why can’t we?

There’s something that runs in their blood, it may come naturally when they are born, it’s the bahala na attitude which means living life to the fullest without worrying about the now because it will be gone soon. Bathala means god (not the Christian but a pagan one) so it literally means to ‘leave it to the gods’, to not worry too much.

However, nowadays it means ‘I don’t care’ or ‘whatever’, putting your faith on whatever happens next.

The greeting I knew before going to the Philippines was Kumusta because is very similar to our ¿Cómo estás? in Spanish, which means ‘how are you?’. However, I got to hear another way of greeting which is to ask f you have eaten already, no matter how many times they see you along the day.

Kumain ka na ba? Or, have you eaten already? is used as a way of being polite and at the same inviting you to join them to eat if you haven’t yet.

Apelyido in Tagalog, from apellido in Spanish, are really funny for the ones who speak or understand Spanish.

Like the first president of the Republic whose surname was Aguinaldo. Aguinaldo in Spain is the money that’s given in Christmas to kids that go door by door singing Christmas carols while in the Philippines is given in the same holidays to the kids and even some adults but in a red Chinese envelope. In Spain this tradition is unfortunately fading away especially in big cities.

Other funny names can be Nievera (nieve means snow in Spanish) or Pelota (ball) Limón (lemon) and Espiritu (spirit).

At the entrance of every barangay (neighbourhoods) around the Philippines is very common to find the names of the alkaldes (mayors) written on a wooden sign. For me it represented a way of welcoming people to their place.

You can also find police boards with their names on them like this one I saw in Puerto Princesa’s baywalk: 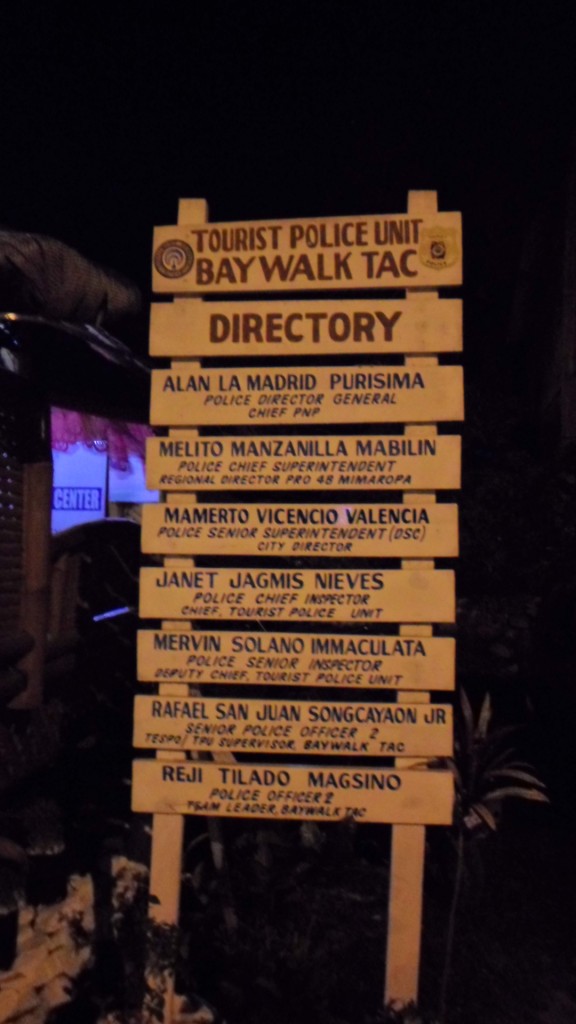 I had never heard before of most of the surnames that appear on the board. La Madrid would mean ‘the Madrid’ like the city but never heard it as a Spanish surname, same with Tilado which sounds Spanish because of the -ado particle.

I couldn’t stop laughing when I saw it. I don’t mean to offend anyone but they are very funny for Spanish speakers!

Some of the Pilipino surnames come directly from Spanish like these ten, the most common ones in the Philippines: Santos, Reyes, Cruz, Bautista, Ocampo, Mendoza, Torres, Tomás and Andrada.

The rest are adaptations or merely inventions! For me most of them sounded so Spanish but at the same time I was like does that exist?

Don’t get surprised if they call you kuya or ate. Filipinos are very respectful with elderly people (or just older than them). The older a person is, the more they call for respect. To address older males they use the term kuya which means ‘big brother.’

The form ate (big sister) is directed towards an older female person. I find it extremely cute. You will hear it everywhere, when addressing a taxi driver, when ordering some food, in the market, everywhere!

I just loved to hear ate Alba from the students I shared the experience with in the temple in Manila! 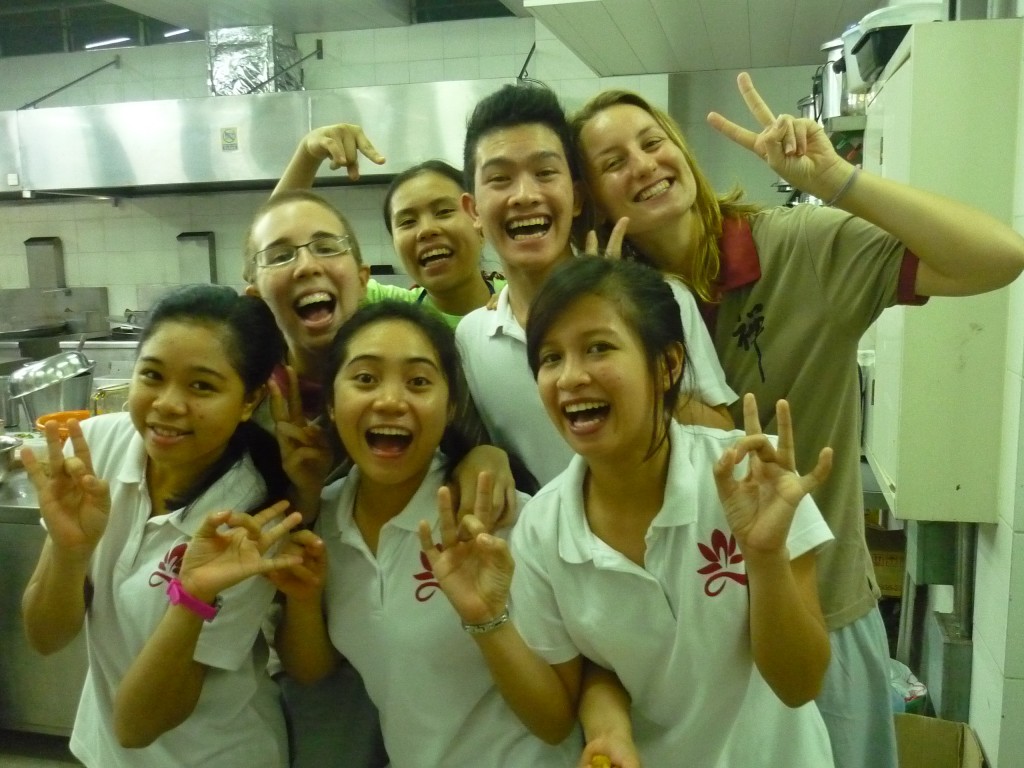 Filipinos use their lips to point or communicate a certain direction. Instead of wasting physical energy by lifting their arm/hand to point, they conserve energy by using their puckered lips. Just like I noticed in Venezuela. Travelling to Venezuela before the Philippines really helped me to understand Filipinos and the connection between Latin America and the Philippines.

It can be used to talk about someone without being seen, to ask someone to pass you the ketchup on the table or just because!

That thing they do with their eyebrows

Don’t underestimate the power of the eyebrows for they play a major role in the Philippines! Filipinos raise their eyebrows when they want to affirm after a yes/no question has been asked. So, if a Filipino doesn’t answer your question, look at their eyebrows first, they’ve probably already answered with their look!

It can also mean hello, how are you doing, good to see you… and can be used together with the lips to make you even more confused! ha!

This one cracked me up at first. When someone opens their mouth in Spain, and I believe in a lot of ‘western’ countries, it is normally to show surprise about what the other person is saying.

In the Philippines it can be either that or (and much more used) ‘I don’t get what you are saying’ gesture and they will stare at you until you explain it again.

At the beginning I thought, are they surprised by everything I’m saying or is it just because?

and they really mean it. They play carols in the malls and people start decorating their houses really really soon. When I lived in Germany I could see that in October they were already setting up the Christmas markets and was already a shock to me but this, this was too much!

I’m not very fond of Christmas but it was interesting to see the special way in which they live it. They beautifully light up and decorate all the streets as you can see in this picture:

This is fact of the factest (I just made this up, I hope it makes sense for you). Almost everyone has their own karaoke player at home and they also go to karaoke bars where they can rent rooms with friends for some hours to sing together and eat, drink and have fun.

This first video was taken at the end of my trip, in Puerto Princesa when my friend Chris and I found ourselves randomly in a birthday party with like 30 Filipinos, it was so much fun and spontaneous!

It doesn’t matter how well you sing, you are always welcome to join. That’s why I loved it!

Chismis (like chisme in some countries of Latin America) means gossip and is the national sport after maybe basketball, not sure.

When gossiping is very common specially among girls to get surprised and even blush when they hear about new gossips that may be a taboo. This is usually combined with the gesture of putting their hands on their mouths to show shyness.

9. Filipinos are the latinos of Asia

They are more connected to Latin America than they are to their neighbours like Taiwan, China or Indonesia. They love dancing, singing and are far louder than their neighbours. They are way far more expressive and ‘touchy’ and the word joke is always in their vocabulary.

Until here some of what I perceived from this wonderful culture that was opened and showed to me. However, there’s more to come! 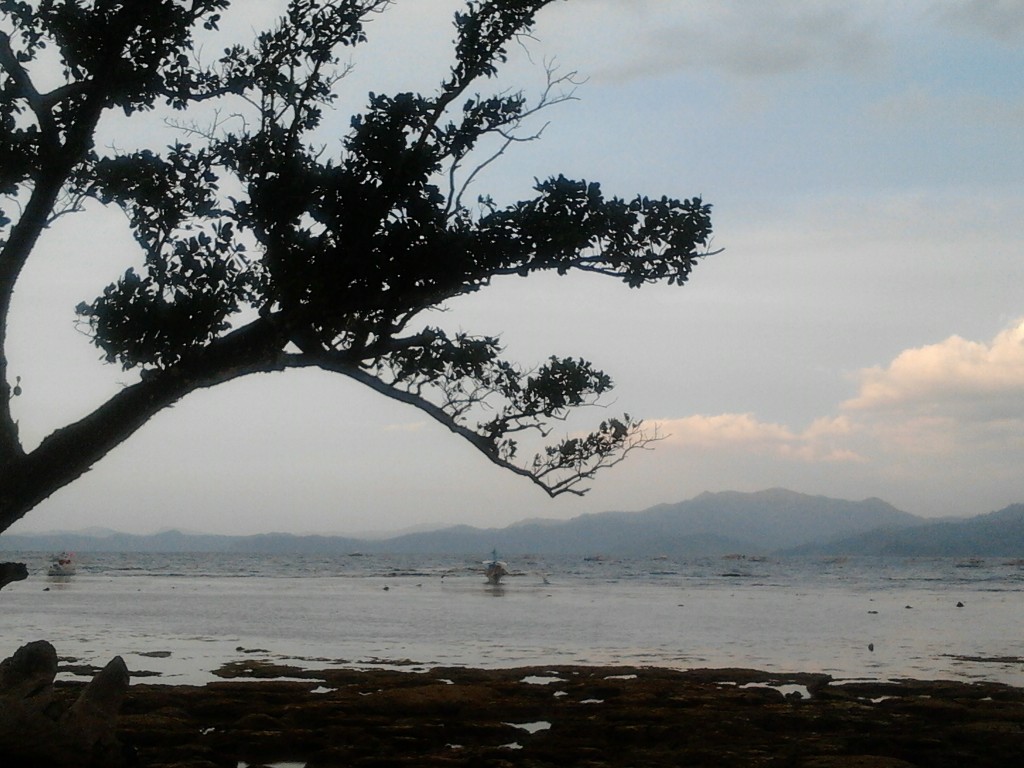 More about the Philippines

Related posts
San Andres for Backpackers
Travel Guide to Sao Miguel in the Azores Islands
May it be that I'm in love with maps?

4 Replies to “9 Reasons to Love Filipinos”